Feeney passes half the field in Newcastle Toyota 86 bruiser

Feeney passes half the field in Newcastle Toyota 86 bruiser 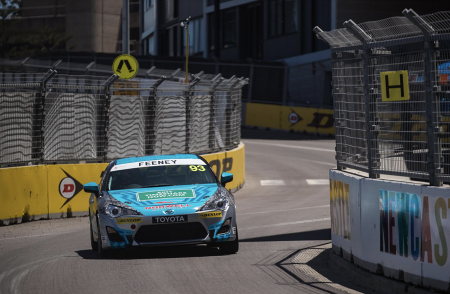 Broc Feeney has passed almost half the field in the final race of a bruising Toyota 86 Racing Series season finale at the Coates Hire Newcastle 500 this afternoon.

Feeney was forced to start from the rear of field after another competitor turned him around while in a solid position during this morning’s race two of the weekend.

Starting 30th, he survived the carnage that was playing out in front of him and around him to bring the Exit Timeshare Now, Firestar Developments Toyota 86 home in 16th position, also setting the second quickest lap time of the race.

Yesterday, he finished 12th in the opening race after approaching the top 10.

It was a difficult end to what had been an exceptional season for the karting graduate, gaining two race wins in his maiden season racing cars.

With a busy racing schedule from 2018 including the Australian Kart Championship, Toyota 86 Racing Series and some select Excel races, he will now focus on the final round of the Aussie Driver Search coming up in a few weeks time.

“What a crazy weekend – it was great to come to Newcastle and have a chance to race on this awesome track.

“We had good pace throughout the early stages of the weekend, but it didn’t fall together as planned unfortunately.

“Our car had the same pace that we had when we won two races at the last two rounds we competed, but things started with the penalty after qualifying and that really affected us putting us from 15th for the first race.

“Just about every time we started moving forward in the races there were a lot of incidents I had to try and avoid.

“Everything started falling our way in race two, and we were moving forward with good pace and then got spun.

“Thanks to Tony Lenan and the team from Exit Timeshare Now for their support this weekend, who used our program to launch their revolutionary new product to the market this weekend, along with the guys from Firestar Developments, Labrys, Norwell Motorplex, Penrite and Paul Feeney Group.

“We’ll go away have a break and plan on coming back next year bigger and better!”