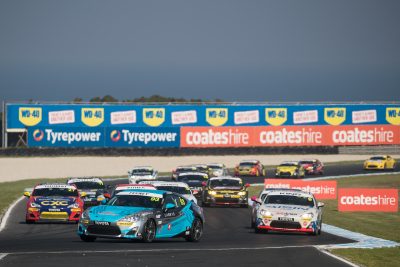 Broc Feeney has had a frenetic start to his Toyota 86 Racing Series career at Phillip Island Grand Prix circuit, ending the weekend with a storming 28th to 12th placed drive in the third and final race, ultimately leaving his maiden Australian race event in 14th position on the points ladder.

A technical issue as a result of the Toyota 86 shuffle in race two saw the 15-year-old leave the track and cross the line 28th, however he was able to blast his way forward in the weekend finale – showing maturity beyond his years.

Driving Will Brown’s 2016 Championship winning car, Feeney qualified ninth on Saturday and then was involved in a race one battle royal that was reminiscent of the 125cc motorcycle races synonymous with Phillip Island!

Having never ‘pack raced’ in a racecar previously, Feeney held strong in the fight against the likes of Series veterans Luke King and Ben Grice and Dunlop Super2 Series last round winner, Chris Pither, for a 14th placed finish. His result was hampered after not getting away from the start cleanly.

The second race in foggy conditions Sunday morning saw Feeney make the start and approach the top 10 before leaving the track due to the technical issue he was experiencing after some on-track argy bargy from other competitors, ultimately crossing the line in 28th position.

To finish the weekend, Feeney picked off five cars on the first lap from 28th on the grid and then continued to advance his way forward with some stunning passing manoeuvres.

He had a confidence boosting run heading to the second round of the Championship in Townsville, with his fastest race times being right among the top part of the field, and individual sector times as fast as anyone in the field.

With a sabbatical until July before the Townsville 400, Feeney’s focus now returns to kart racing competition with the third round of the SP Tools Australian Kart Championship to be held in Newcastle over the last weekend of May.

“It was an up and down weekend and I was able to learn a whole lot,” said Feeney. “I’ve raced some pretty high levels in karting, but to come into the Toyota 86 Racing Series and be racing against guys like Chris Pither and other guys that have so much experience in the category is a really big step up.

“I’m overall pretty happy with the performance. Practice saw us set some quick times and qualifying was pretty good. We were still learning the racecar, along with learning the racing side of things.

“The second race, we got caught up in some crashes and stuff happening on track, but to come through from 28th to 12th, making 16 places in the final race really gives me a lot of confidence. 14th overall for the weekend isn’t a bad result with 39 drivers in the category.

“We’re looking forward to Townsville now and hopefully we can get a good qualifying there and be right up the front for the weekend.

“I can’t thank my team and the guys behind us enough – especially Firestar Developments, Labrys, Marriott Vacation Club and Norwell Motorplex, along with the Toyota 86 Racing Series team that work so hard, especially Jason Bargwanna and Greg Crick for their advice throughout the weekend.”