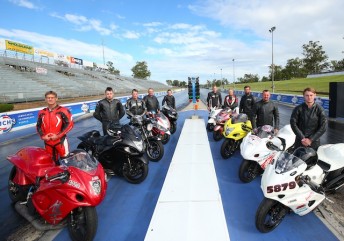 A host of father and son racers will compete on two-wheels at the Fuchs Winternationals this weekend. pic: dragphotos.com.au

MEDIA RELEASE: drags – When the Fuchs Winternationals hit Willowbank Raceway across the Queen’s birthday long weekend (4-7 June), no less than five father and son pairings will be competing on two-wheels across the Modified Bike, Competition Bike and Pro Stock Motorcycle categories.

Proving the age old adage of ‘the family that plays together, stays together’, these father and sons are ready and rearing to go at what is the largest championship drag racing event held outside of North America – expected to host more than 500 racers and around 30,000 spectators over its four days.

Mick Mundey, Craig Edwards, Reegan Ward and Ken Collin and their sons Brandon Gosbell, Ace Edwards, Mitchell Ward and Chris Collin respectively will all hit the track at Willowbank Raceway this week, with all but Gosbell competing in the competition bike bracket.

Cheering them on will be another father and son combo in Alan Annis and his son Alan Annis Junior, with this pairing now to be represented by the father only in Modified Bike with engine damage sidelining Jnr’s Fuchs Winternationals plans.

All five of these pairings took part in a special photo shoot at the recent Summit Racing Equipment Sportsman Series event on April 11 at which they were all competing, in celebration of what they do on and off the track, and spoke about what racing as a family means to them.

Please see below for comment from these five father and son line-ups, as well as event information.

Also hitting the track on two-wheels as father and son will be Pro Stock Motorcycle racer Locky Ireland and his father Johnny Ireland (Competition Bike).

QUOTEBOARD: FATHERS AND SONS ON TWO-WHEELS AT FUCHS WINTERNATIONALS

Reegan Ward – 41 year old Director from Gladstone, racing for six years – Modified Bike (father of Mitchell Ward)
“It all started as just having fun on my Harley- a need for speed.

I’m still chasing that,” said the 2014 Winternationals category winner who would like to thank the Red Star Racing crew, sponsors Brown and Meyers Body Works and Twin Valleys Motorcycle Club, and all of his family and friends for their support of their racing.

“Racing against my son makes me extremely proud. When we travel to race it’s the fun of road trips with your son.

“It’s a great time together and you don’t always get that at home. Going up against him always brings out the best in both of us and of course the bragging rights go to the winner.”

“Dad and all his mates were into racing bikes and it seemed like fun, so I got rid of my dirt bike and bought a drag bike. It’s awesome racing Dad.

“It just makes you try harder, and we have a lot of support from our family which really ‘makes it’.

“This will be my first year at Winternationals – for the last three years I’ve been watching my dad compete, I can’t wait. Willowbank is the best rack that I’ve ridden on, it’s very well set up.”

Ken Collin – 55 year old from Anstead, racing for 34 years – Modified Bike (father of Chris Collin)
“My father raced speedway and was an army stunt rider, I have always had bikes and I got into drag racing as a mechanic of the then Queensland Drag Racing Association President Pat Keily who convinced me to take my fast street bike to a street meet back in 1981,” said the defending Queensland Drag Racing Championship Modified Bike champion.

“Last year I made the semi-finals at the Winternationals and in 1982 I actually won Competition Bike – it would be great to win this year some 33 years after taking that victory.

“Racing against my son sometimes makes for an interesting drive home after an event.

My wife gets to listen to both of our excuses and boasts. We both enjoy the race. I like to see him win, so if I lose I get to watch him race and if I win he gets to watch me race.

“A final at the Winters between my son and I would be the highlight of my life. It is the type of sport where all members of the family can be involved in a race team and can participate in some way.

“My wife used to race at street meets and was an official in the early days of Willowbank. The presence of the father/son race teams in the bikes alone demonstrates this is a family friendly sport.”

“I started drag racing in 1998. My father had some time away from the sport and was planning on purchasing a bike to get back into it, but we ended up coming home with a Junior Dragster,” said Collin, who was the 2007 Willowbank Raceway Junior Dragster champion, and took out the Modified Bike category at the last national championship round held for the category at the Raceway.

“I always preferred bikes growing up so naturally I transitioned to Modified Bike in 2007 when I turned 17 and finished racing Juniors.

“Just being a part of the Winternationals each year is awesome, and it’s pretty great to race different racers from all over Australia at my home track. Racing alongside dad is cool, I enjoy watching him race as much as I enjoy racing myself.

“I guess it puts a little more pressure on myself to out-react him when we do race, for the sake of bragging rights, but unfortunately we are yet to race each other in eliminations – I am hanging out for a father v son Modified Bike Winternationals final!”

“Brandon and I haven’t raced each other, only had qualifying passes together. When we do, whoever wins will have bragging rights for a long time. More families should give racing a try. It isn’t that expensive to get started.

“Race against your wife in the street series or just take the family car to a test and tune. I’ve only raced in four or five Winternationals but I have made it as far as the semi-finals.

“I have a new bike from America with a new set-up that has been a great learning experience, this will be my first Winters in Competition Bike and my goal is to qualify in the 16-bike field.

“I’ve been riding motorbikes since I was seven and I started drag racing when Brandon started in the Junior Dragsters 11 years ago. I love bikes, they just seem more challenging than a car.”

“I got into drag racing through my parents. They took me to a superbike meeting at Willowbank. After that I was hooked,” said Gosbell, who thanks his sponsor Ultimate Motorbikes Ipswich and his parents for their support.

“My Dad raced bikes for a number of years and after racing junior dragsters, the technical side or racing motorbikes seemed like a healthy challenge for myself – coming from a car background.

“It’s great to be able to compete as a family and be able to share a common passion with my dad. The fact that the whole family can participate on some level is what makes this sport great, whether it is crewing or racing anyone can participate.

“I believe the accessibility for the spectators to be able to get up close and personal with the racers and their vehicles is also a real drawcard for the sport.

“I’ve never competed in a race with my dad, just qualifying. A highlight for me was when I had the opportunity to go over to the USA and ride in the Manufactures Cup world finals event – the largest motorcycle drag racing meet in the world.

“Racing against people I’ve idolised for years was an incredible experience and still hard to believe at times! I’ve raced in every Winternationals since 2004, it’s an awesome venue and track.”

“One of the best things about my career is that I get to go racing with friends and family.

“It’s really satisfying know my kids’ interests and goals are the same as mine, I’m proud. When we go up against each other it’s the young bull versus the old bull – you get to see each other’s skill level.

“I was racing Pontiac Trans-Am and both kids were racing in Junior Dragsters. I used to help the kids racing and on top of that was able to fit in racing a bike! Bikes are a hell of a rush and modern bikes easily make big horsepower. Fast is fast once and then it’s never fast enough, unfortunately.”

“I started racing a junior dragster when I was 13 and I raced that until I was 16 and got my drag licence after that I jumped straight onto a Hayabuse my dad bought me,” said Edwards, who is planning on racing in both Modified Bike and Competition Bike in the 2015/16 season.

“Bikes always bring tough racing but it’s just the thrill of riding. My dad and I haven’t lined up too many times in racing but last year we got to run side by side in qualifying at the Pro Street shoot out.

“It was definitely a bit of a grudge race and a whole lot of fun. It can be a little distracting racing against my dad, as we help out with tuning each others bikes and I am always interested to see how his bike runs.

“I sometimes find myself looking into the other lane to see how his bike is running. Willowbank is a world class facility. it would have to be my favorite place in Australia to race. The atmosphere at those big events is just unreal.”

“Willowbank Raceway is just like home, I love it. I modified my push bike as a kid and then I got my first motorbike – a Yamaha road bike that I raced.

“This is such a great family sport – a good day out and a great chance to catch up with old friends from near and far. With bikes it’s just the thrill of the ride,” said Annis, who has a new bike on the way and would like to thank Steve Kelly of PM Lubricants, Andrew Badcock of Pro Cycle Dyno, Tim and Scot of Speedy Motorcycles and Gavin and Blaze Hansen of Wizards Fabrications for their support.

“I grew up watching Dad race and I always wanted to compete alongside him. It’s great fun racing against my dad and it makes me try harder to give the old boy a floggin’. Willowbank is like my second home, I’ve made some great friends out there.

“I can’t wait for this year’s Winters – we have a killer field of riders and everyone’s hungry for that shiny tree!”

Corporate options are also available, please email [email protected] for enquiries or to make a booking