A surname that is synonymous with the GP Midgets class, the Saville legacy has continued off the back of a historic result in the recent Victorian Title at Rushworth Speedway, which saw father-daughter duo Rod and Janelle Saville claim a memorable 1-2 finish. 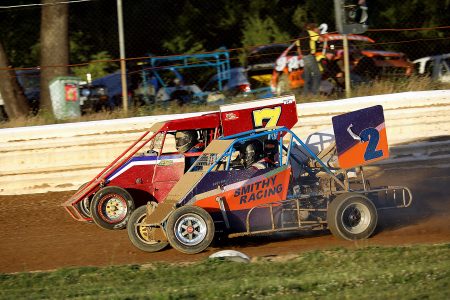 With Rod introducing his family to the class, having raced for many years, winning the 1995 Australian Title and multiple NSW Titles before stepping away from driver duties for around 15 years, while his brother Ian also raced, winning the 1978 and 1988 Australian Titles, the pathway for his kids to follow suit was clear, with his son Scott winning the 2013 Australian Title, in the same season that Janelle decided to join the ranks.

Since then, Janelle has continued to improve, finishing on the podium in an Australian Title along with numerous NSW Titles, while her best previous Victorian Title result occurred in 2014 with a third-place finish.

With the last few seasons witnessing a resurgence in the class, particularly in NSW, the time was ripe for Rod to re-join his daughter on the track aboard his Kawasaki ZX12 powered NSW # 59 car on a more regular basis last season, just in time for Janelle to emerge victorious in the NSW Club Championship.

Heading into this season’s Victorian Title-deciding feature race, Janelle was set to start out of position four, while Rod was forced to start back down the field in 11th by virtue of his front end breaking in his final qualifying heat race.

However, as if it was meant to be, both Rod and Janelle made the most of the 20-lap distance, with the former’s hard-charging performance rewarding him with the state title honours, while the latter came home in the runner-up spot.

Even though she finished second, the Camden, NSW-based racer, who does most of the work on her own car herself, was thrilled to have done so behind her dad.

“This is such a massive achievement for me and my dad; I’m very proud of both of us and quite humbled to share the podium with him,” expressed the pilot of the NSW # 2 Smithy Racing / Saville Racing supported PBR car, which is also powered by a Suzuki GSXR 1100 engine and is owned by her partner Lauren.

“It’s very much a family operation and we’re a tight-knit unit, so to have all of our hard work pay off with a 1-2 finish in the Victorian Tile is amazing. I can’t thank my dad enough for his constant support, along with my partner Lauren, who is without a doubt the biggest supporter of my racing.”

Off the back of this pleasing result, the Saville family will now prepare for their NSW Title at Nowra Speedway on March 9, followed by the Australian Title at Wangaratta City Speedway in Victoria on March 30.

Saville would like to thank the following 2018-19 season sponsors for their support: Smithy Racing, Saville Racing, and PBR Chassis.

To find out more about Saville and her team, LIKE them on Facebook by searching Janelle Saville GP Midget Racing NSW.