Fast femmes ready for the Island as day one unfolds

Fast femmes ready for the Island as day one unfolds 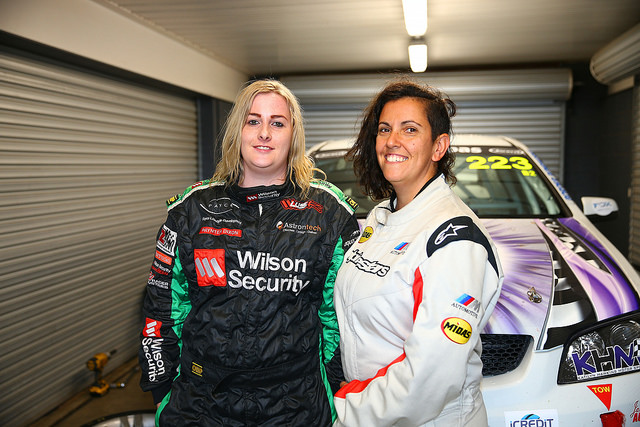 Katilyn Hawkins will be joined at the wheel in the Phillip Island Six Hour this weekend by fellow fast femme, Danielle Walton.

Hawkins and Walton will steer the Katilyn Hawkins Motorsport Holden Commodore VE SS at what is the final round of the 2018 Jacuzzi Spas Australian Production Cars season at the picturesque Phillip Island Grand Prix Circuit, which enjoyed its opening practice sessions today (for details on how Saturday’s action for all the categories racing this weekend at the APC-run event, please see further in this story.)

“It is great to be able to come to the Phillip Island Six Hour considering that at the first round this year at Sandown our car was majorly damaged and out for three months of repairs,” said the 24-year-old Hawkins, who hails from Victoria’s Carlton area.

“We were proud to make a return at the Winton Motor Raceway round, going on to take the class win which has been really valuable in helping us to find a couple of sponsors to help us here to the big finale.

“This is a great track to race at and the Commodore will have great power down the long straights. With its new brake package, I also expect it to handle well through the corners.

“For us our goal is to complete the six hours with no damage to the car. At the same time, hopefully competing with an all-female line-up can help to promote women in motorsport.”

The Gold Coast’s Walton was the first woman to tackle a full season of the ‘V8 Brutes’ in 2004 and has a long list of state and national racing exploits to her name.

“Having raced the Bathurst 12 Hour and also in a two hour with Amber Anderson years ago it is great to be back in endure racing, especially at Phillip island,” Walton said.

“It’s great to see that the support behind women in motorsport has become stronger since I last raced back in 2008. WAMS has done a great job in supporting women in motorsport and helping pave the way for my fellow up and coming drivers such as Katilyn.

“As a team we are looking to be consistent and finish the full six hours on Sunday. It would be great for the team to finish on a high having had a not so great start to the season. If we can get the car over the finish line, Katilyn has a high chance of winning her class.”

Joining the APC racers on-track at Phillip Island this weekend is the final round of the 2018 Australian Prototype Series presented by Hot Wheels, BMW E30 Club racing, and Lotus sprint sessions run by Lotus Australia.

In the APS, John-Paul Drake topped qualifying ahead of the final three races of the category’s championship chase, which will all be held tomorrow (Saturday 3 November).

Those wanting to watch the event this weekend are spoilt for choice: trackside tickets are available at the gate from just $20 for adults and $15 for concession holders (please click here for full ticket pricing) and full coverage of both Saturday and Sunday’s action will be provided online thanks to a free live stream available through www.australianproductioncars.com.au and www.facebook.com/AustralianProductionCars