Farrugia looking for victory in Portland

Farrugia looking for victory in Portland 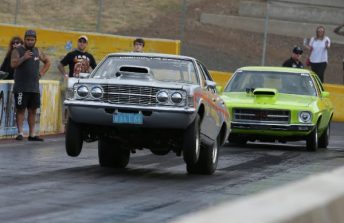 Bill Farrugia is looking to take the performance that saw him top qualify at the last round of the Summit Racing Equipment Sportsman Series and convert that into an event victory at the upcoming South Coast 660 event.

Round seven of the Summit Racing Equipment Sportsman Series, the South Coast 660 will be held at Portland’s South Coast Raceway across January 20 and 21, 2018.

The 51-year-old cabinet maker is hopeful of a Denso Super Street bracket victory next month in his 1973 Ford Cortina, which runs a 408 Windsor C10 transmission with a nine inch diff.

“My goal at round six was to top qualify and that is what I did,” said the Melton (Victoria) resident.

“The car was running very consistently and when it came to racing, I had a bye in the first round before facing off against ‘the bricklayer’ Graeme Cooper – I reacted better but unfortunately the car ran off the pace in that one. All in all though, I was happy with how the day panned out.

“For Portland our preparation is underway and we will be switching back to slick tyres after running radials at Calder Park. Hopefully we can this time around not only top qualify, but go on to win the event – that is certainly our goal.”

Farrugia has been racing since 1993, starting out in Super Street and also running in Super Sedan.

“The Denso Super Street competitors are a good bunch of guys,” said the racer, while thanking Coburg tyres and M&M Race Engines for their sponsorship of his racing program as well as his crew – Graham, Ryan, Spy, Max and his son Jamie, as well as his wife Martess.

“I love that our bracket is all about winning races without the electronic devices like throttle stops and delayed boxes.

“I can’t wait to get back in amongst it with them in January – South Coast Raceway is a great place to race at and it has some great staff as well.”

Round seven of the Summit Racing Equipment Sportsman Series will be held at Portland’s South Coast Raceway on January 20 and 21.