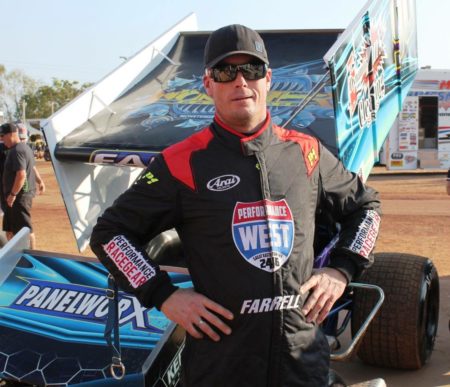 The much anticipated 410 Sprintcar return of Ryan Farrell has been confirmed, with him locked into contesting the upcoming Chariots of Thunder Series at Darwin’s Northline Speedway in the Northern Territory.

After a total of five seasons on the sidelines, Farrell, who last drove a 410 Sprintcar during the 2015-16 season, is excited about his impending 410 Sprintcar return, and he is going to be doing it by running the family-owned WA # 95 Maxim.

Apart from family support, Farrell’s return to 410 Sprintcar racing has been made possible thanks to teaming up with good friend and crew chief Brenton Puddy, along with Sean Carren from Goldstar Transport and Steve Duggan from Cowara Transport. All three of the aforementioned figures have played a significant part in Farrell’s 25 plus years of Sprintcar racing, so it’s kind of like getting the ‘band’ back together.

Farrell’s return to 410 Sprintcar racing sees him armed with two complete Maxim cars, one of which is owned by Duggan and was coincidentally put together by Brand Passmore who played an integral part in Farrell’s family-owned car in the 2000s, that are going to be powered by 410ci engines prepared by Peter Morris from Maxwill Racing Engines.

Since bursting onto the Sprintcar scene in the early 1990s in his home state of Western Australia, Farrell quickly developed into one of the country’s best racers. Over the past three decades, Farrell’s highlights include minor Australian Sprintcar Championship podium finishes (second in 2005 and third in 2009), five World Series Sprintcars Championship round wins – with a fourth in the final WSS point standings during his one and only full-time campaign during the 2009-10 season, seven Western Australian Sprintcar Title wins, and so much.

Now at the age of 47, Farrell is looking forward to getting back behind the wheel of a 410 Sprintcar and taking on an array of the country’s best racers.

The initial goals for Farrell and his team of loyal supporters are to contest the Northern Territory Title on August 14, followed by the Chariots of Thunder Series double header weekend on August 20-21 and 27-28.

When it comes to their plans beyond their Northern Territory return, Farrell and his team are going to be assessing their options regarding their 2021-22 season campaign.

Farrell and his team would like to thank their 2021-22 season sponsors: