One of the newest faces on the 410 Sprintcar scene in Queensland is Tim Farrell, and he is certainly making an impression in his first full season. 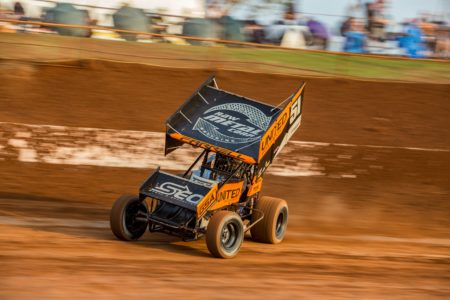 So far this season, the Gold Coast, Queensland-based racer has been qualifying further down the feature-race field and as a result he has had his work cut out for him and as a result forced to move his way through the field and has managed to record numerous top-10 finishes. However, on Saturday night, he managed to start the feature race from position five and was able to go on and maintain that position for the entire 30-lap distance.

Farrell was pleased with Saturday night’s result as it was not only a solid reward for all the team’s hard work so far this season but also a boost to his own confidence for the remainder of the season.

“It was great for the whole team to come away with a season-best result and it shows what we can do when we can put together a whole night,” said the 31-year-old racer, who at the previous Archerfield Speedway race meeting was cruelly denied of a podium finish, due to running out of fuel on the final lap.

The Qld # 51 United Waste Services supported ART car pilot’s plans for the rest of the 2019-20 season are to run the remaining Queensland race meetings and contest the three-night Easter Trail down in Victoria. For next season, he is wanting to expand his season schedule by competing in several of the major interstate race meetings.

Prior to this season, Farrell boasts a brief but competitive speedway background. After competing in Motocross and Supercross events on two wheels and then more recently Go Karts on the tar, he ventured into speedway. Farrell’s first taste of speedway was in the 2017-18 season, when he joined the Compact Speedcars and the highlight in that class was impressively winning the Australian Championship at Kingaroy Speedway. Towards the end of his first season, he moved into Speedcars. After contesting the first half of the 2018-19 season in the Speedcar class, he took on another challenge by dipping his toe into 410 Sprintcars. He ran a total of 10 race meetings with the Ayers Family team in a lease deal, before deciding to setup his own 410 Sprintcar team for this current 2019-20 season.

“For me, my move into speedway was only ever going to be on a casual basis, but that soon changed and after a few seasons here I am with my own Sprintcar team,” Farrell explained.

“I’m really enjoying my time in Sprintcars and the goal is just keep improving to become a consistent front runner in the seasons to come.”

The next outing for Farrell is going to be this Saturday night’s fourth Ultimate Sprintcar Championship Qld round at Toowoomba’s Hi-Tec Oils Speedway.