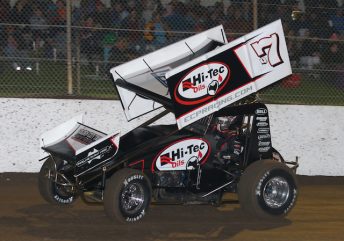 The three-time Australian Champion asserted his authority from the start claiming yet another IBRP.com Quick Time award with a blistering 10.965 circulation, however Peter Lack was preparing for a front row start for the A-main with a pair of heat wins after qualifying ninth.

Danny Reidy and David Whell also claimed heat wins in front of an impressive crowd, however Andrew Scheuerle added another luckless title fight to his resume, with a terminal engine issue ruining his hopes sadly after qualifying with an impressive second quickest lap.

Mitchell Gee was the standout of the night, qualifying third quickest, however an DNF in the second round of heats left the Titan Racing debutant 8th in points and a seat in the top 8 shootout.

Gee advanced to the second row of the A-Main through a stellar run through the Bronze, Silver and Gold shootouts starting beside fellow young gun, Lachlan McHugh.

With the traditional 35 laps for the title locked into the lap counter, Farr chose the bottom of the track to start the journey, and was caught unawares by a staggering start by Lack who opened a healthy gap in the first lap and retained the lead for the first twenty laps, while Farr came under fire from Gee who displaced his elder for almost 8 laps while all three made nail biting passing attempts through lapped traffic.

Lachie McHugh was the first major casualty rolling over in turn 4 on lap 15, not long before Rawlings and impressive youngster Jayden Peacock came together in lap 16 after the restart.

Predictably, the field settled between laps 20 to 30 as defending champ Luke Oldfield who started from fifth, wisely progressed to third while the battles played out around him, taking the spot from Mitchell Gee who spun out taking a chance for a pass on the top two with just six laps to go.

With Lack in charge over Farr and Oldfield, Farr was able to edge past Lack before a caution with just three laps to go set the scene for a last dash to the flag with Lack coming within striking distance of the Q7, but not close enough to rob him of a sixth title.

“That was great fun,” Robbie said in victory lane, “because it was clean and the track surface was great to work with, but Lacky certainly is gutsy and was putting his car in tight spots to get past but we were thankfully able to hold him off. Lapped traffic bit me at the start but helped me at the end, so we’re thankful.”

Lack agreed, emerging from the car with a super-sized grin after the hard fought 35 lap battle, obviously pumped with confidence leading into the defence of his Will Power 500 title on November 5.

“I love this place, and that tonight was fantastic and hopefully we can step up one more step on the podium in November.”

In the Modified Sedans, Toowoomba’s own Rodney Pammenter made a dominant clean sweep, winning all three of his heats and the 30 lap feature, while David Collins celebrated the win in Compact Speedcars, and Tim Weir established himself as an unbeatable force in the Cosworth Sierra in the National 4’s.

The attention now turns to Ultimate Pink Night on November 5 featuring the Will Power 500, where women of all ages are free as we raise money for Pink Ribbon and “help drive out breast cancer.”

For details, stay up to date at Hi-Tec Oils Speedway on Facebook and www.toowoombaspeedway.com