In life, there are those who dream and those who chase after their dreams. Scotty Farmer is certainly in the latter category. 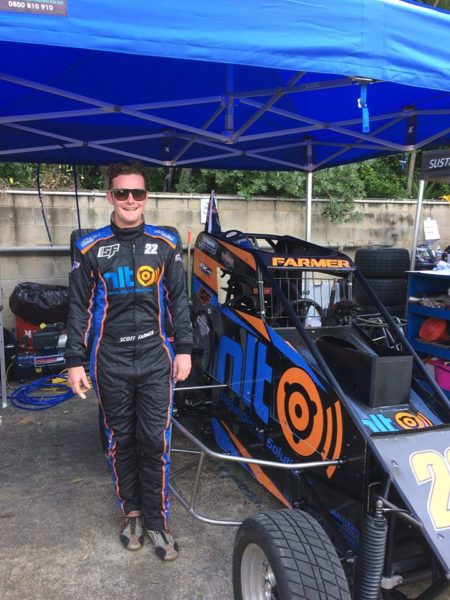 Next month, Farmer is leaving behind all that is comfortable in the Australian state of Queensland to move over to America to be based in the state of California for the next three years. And if he has his way, he is planning on not returning, as he chases his dream to become a full-time racer.

Over the past 12 months, Farmer has shelved his own racing program in Speedcars here in Australia in order to save money, along with moving back in with his parents, working long hours at his job and spending his limited spare time working his fitness in order to move one step closer to his American dream.

Farmer is headed over to America next month and will be based out of Ventura in California, where he will be running the entire West Coast USAC Midget Series with the Six8 Motorsport team, along with selected West Coast USAC Sprintcar shows with the Steve Watts-owned Maxwell Industries team.

To say that Farmer is excited about this opportunity to chase his dream of becoming a full-time racer would be quite the understatement.

“I’d be lying if I said that I wasn’t a bit nervous about what lies ahead, but in saying that, I’m more excited than anything else,” expressed the 26-year-old racer.

“I’m really forward to getting over to America next month and beginning what is going to be an amazing journey in a new country.”

Farmer continued by saying that none of this would be possible without the support of one main person.

“Apart from the support of my family and friends for encouraging me to go and do this, I can’t thank Steve Watts from Maxwell Industries enough,” he said.

“Two years ago, I randomly reached out to Steve before I came over to America to do some race meetings on the West Coast and since then we have built up a strong friendship, and I owe a lot to him for his support towards me making the big move over to America.”

When it comes to moving countries, Farmer is no stranger to doing that, after he and his family moved from his home country of New Zealand to Australia in 2008.

After moving to Australia, Farmer stepped up his interest in speedway, following him growing up in the sport as both of his parents raced back in New Zealand. In 2013, he moved into Formula 500s for his first taste of speedway racing, where he spent two seasons. Following his period in Formula 500s, he moved into Speedcars, where he really stepped it up. After becoming a regular front-runner in his home state of Queensland, which included overall point score wins, Farmer has recorded a top-five finish in an Australian Championship back in 2018, along with numerous racing opportunities over the past two years in non-winged cars in both New Zealand and America.

The future for Farmer might be one that is full of uncertainties with his move over to America on a full-time basis, but there is one thing that is for certain, he is hungrier than ever to build a career as a full-time racer.