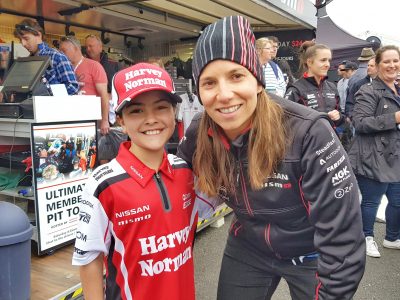 Following its overwhelming popularity with fans in 2017, the Harvey Norman PhotoCentre will return to Mount Panorama next weekend.

Located in Merchandise Alley, the Harvey Norman PhotoCentre allows fans to get photos with Supercars heroes and legends printed and signed at the event.

Harvey Norman will also be offering Supercars fans the opportunity to print iconic Bathurst 1000 images only available this weekend.

“The PhotoCentre was a huge hit with fans on its debut in 2017,” Supercars General Manager – Commercial Jamie Black said.

“Moments created at Mount Panorama during the Supercheap Auto Bathurst 1000 last a lifetime, so to be able to instantly print a photo with fans favourite drivers and have them signed the same day is something special.”

Harvey Norman CEO Katie Page says, “Everyone carries a camera with them everyday capturing their own memories and moments on their phones. Bringing Harvey Norman PhotoCentre to Bathurst again we want to give fans the opportunity to print their Bathurst memories on any number of products whether it is prints, mugs, calendars and put them on display”.

The Harvey Norman PhotoCentre will be available to fans from Thursday to Sunday in Merchandise Alley, Harris Park.

There will be a selection of iconic Bathurst 1000 images for fans to purchase and print on their choice of products to take home their own memories from the mountain. Anything from prints, canvases and mugs to calendars and photobooks.

A crowd of around 200,000 is again expected to attend this year’s Supercheap Auto Bathurst 1000 which will run from 4-7 October.

Fans will be hoping for another memorable race, following David Reynolds and Luke Youlden’s historic win in the Erebus Penrite Commodore last year.

This year’s event marks 50 years since Holden’s first win at Mount Panorama, while fans will also can “Farewell the Falcon” with Ford announcing the Mustang will return to the grid from 2019, while there will be three new inductees to Supercars Legend’s Lane.

Fox Sports 506 has a dedicated, 24/7 Bathurst channel for race week.

Supercars and Foxtel will broadcast the Supercheap Auto Bathurst 1000 in 4K, making the sport the first in Australia to be televised in the highest possible resolution available in the country.

Foxtel will deliver 48-and-a-half hours and 22 hours of live coverage respectively – produced by a crew of 350 – along with feeds for international broadcasters, Bathurst’s big screens and the Superview streaming service.

TEN will deliver over 21 hours of LIVE coverage on TEN and TEN HD from Friday to Sunday.

Tickets are still available through Ticketek.