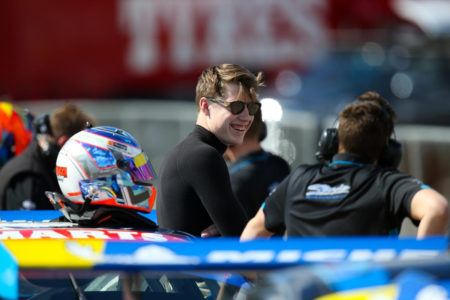 Max Vidau will return to the Sonic Motor Racing Services for Round 2 of the Porsche Carrera Cup Australia at The Bend Motorsport Park in South Australia next weekend.

Vidau, the 2017 Australian Formula Ford Champion with the Sonic squad, made the step to Carrera Cup competition in 2020, only for the COVID-19 pandemic to skittle his plans before it barely started.

Due to a budget shortfall, Vidau was unable to contest the opening round at Sandown, but will make what he is calling a ‘one-off’ return at The Bend next weekend.

While he has not contested any circuit racing in the past year, Vidau has been keeping race fit by racing in various speedway events across South Australia and Victoria, driving a 410 sprintcar.

To reacquaint himself with the Porsche product, Vidau and Sonic conducted a test at The Bend last week, giving him a chance to get his eye back in the game before he takes on the competitive field.

Track action for Porsche Carrera Cup Australia kicks off on Friday at The Bend with races on Saturday and Sunday.

“We missed the first round because of budget constraints. We had the chance to do it, but fell short, so we have decided to go round by round and see how the season plays out,” said Vidau.

“We did the test at Tailem Bend last week. We were straight on the pace, which was encouraging, but the field this year is super competitive, so we’ll need to be on our game in every session.

“I’ve been keeping sharp driving in a 410 sprintcar. I’ve had some heat wins and went under the 20 lap record at Murray Bridge recently.

“When we are in the Cup car, it feels like you have 10 seconds to think about what you are doing, but in sprintcar you have one second, so when you get in the Porsche, it seems more chilled out.

“Sonic always gives you a good car. The team was very fast at Sandown in the first round, so I’m looking forward to getting into a competitive car and having no excuses.”

“Max is a driver that we’ve seen come through our Formula Ford ranks, and it’s great to get him back into Porsche and Carrera Cup,” said Ritter.

“It was a shame that we were not able to get him into a car for Sandown, but we know that he will be able to get in and be on the pace very quickly at The Bend.

“Having a four car team, with four extremely good drivers, is a great result for us and we’re looking forward to seeing how we go against the very competitive field.”