F4 storms to Silverstone to start season’s second half

F4 storms to Silverstone to start season’s second half 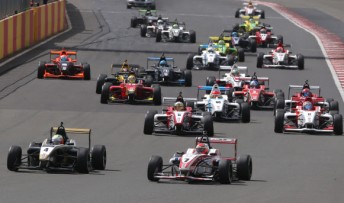 The BRDC F4 Championship returns to Silverstone this weekend (16-17 August) as the second half of the campaign kicks off at the same venue that started the season back in April.

With six different race winners from the 12 races held so far, the championship is proving to be extremely hard fought, with just 20 points covering the top-three drivers in the standings.

On the championship’s last visit to Silverstone, HHC Motorsport’s Raoul Hyman claimed the first win of the year to take an early title lead, but Lanan Racing’s George Russell claimed a double win to take over at the top, and he has held that lead since.

Any thoughts that this could be a two-horse title race, however, have been brushed aside at the last two rounds, as Will Palmer and Arjun Maini have thrust themselves right into contention after two wins each.

HHC Motorsport driver Palmer secured a double win at Snetterton and also took the record for the most points scored in a main season F4 race weekend, while Indian racer Maini won at both Snetterton and Oulton Park. Palmer’s run of form, which also included a double podium finish at Oulton Park, means he’s just 20 points off leader Russell, and equal on points with team mate Hyman. Maini is 47 points off the top spot, but with 95 points available from a race weekend, the championship picture could change rapidly.

Sennan Fielding, fifth in the standings, is also edging closer to his first main season win, having taken three podiums so far this year. A double podium finish in Cheshire for Mark Godwin Racing’s Chris Middlehurst means he too is edging into contention.

Silverstone is the local venue for Sean Walkinshaw Racing’s Jordan Albert. The 17-year-old lives just across the circuit in Silverstone Village, and he’s hoping his home advantage can play dividends this weekend, commenting: “A lot of my friends have wanted to come along to see me race and I’ll have all my family there too, so I’ll have lots of support. It will help me and I really appreciate it, and hopefully I can reward them with some good results at Silverstone.

“Silverstone is my standout circuit by far. It’s such a quick and flowing track and the run from Copse all the way to Stowe is a massive thrill and very special to drive, but it has its technical parts as well with the new part of the circuit. Being an F1 venue makes it even more special.

Albert has a new team mate for the three races this weekend, with Euroformula Open championship contender Alex Palou joining the young Briton and Venezuelan Diego Borrelli at the Oxfordshire-based team.

Malaysian contender Rahul Raj Mayer is hoping his experience of the venue will help him secure more top-10 finishes in his second season of F4. “I’ve now proven myself as a top-10 runner and I now need to make my way up to the podium and be a consistent top-five finisher,” commented the Hillspeed racer.

“It’s a great track and is very open and fast flowing. The good thing with racing in F4 is the variety of tracks we go to, and I’ve grown to become accepting towards both open and tight circuits.”

The first round at Silverstone this year saw mixed conditions and a wet qualifying session which saw Mayer line-up a career best sixth on the grid. The 18-year-old is hoping for more precipitation this weekend: “Being a Malaysian, I love the wet and I know I have the pace. Hopefully we will get another downpour at Silverstone!”

Qualifying at Silverstone is due to start at 10.35am on Saturday (16 August), with the first race underway at 14.35. Races two and three will follow on Sunday at 10.20 and 15.05 respectively. Full updates and live timing are available on the BRDC F4 website www.formula4.com throughout the weekend, and TV highlights will be shown on the weekend after the event on ITV4.

Championship standings after race 12 of 24: