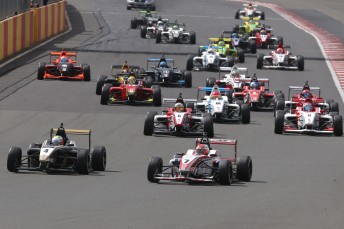 In the opening triple header at Silverstone at the end of April, Lanan Racing’s George Russell powered into the championship lead after taking two wins on the same day, becoming only the second driver to achieve that feat in BRDC F4, while HHC Motorsport’s Raoul Hyman took the first win of the season after coming close on several occasions last year.

Russell, the second youngest driver on the grid at just 16 years old, leads the championship by 13 points from Douglas Motorsport’s Diego Menchaca with Hyman third. Russell’s team mate Arjun Maini is fourth having secured a podium in the third race at Silverstone, with Will Palmer fifth for HHC Motorsport and Gustavo Lima completing the early top six for Hillspeed.

Despite having never raced at the Kent venue before, Russell is positive of another strong weekend as he looks to consolidate his early advantage. “I’m confident of another good showing this weekend” he enthused. “When you’re leading the championship, podiums are always the aim, but ideally we will be challenging for more wins as well.

“I’m really looking forward to racing on the Brands Hatch Grand Prix circuit, it’s a classic track and very challenging. I love anything that challenges me and really enjoy learning new circuits too. I half know it already as I’ve tested on the Indy circuit, but the full length circuit is something else.”

Menchaca claimed two podiums at Silverstone on his strongest weekend in F4, having also raced in the series in 2013, while fellow returnee Hyman sits third. Hyman is optimistic he can add to the win he secured at Silverstone and wants to leave the Kent venue as championship leader. “I strongly believe that we are capable of winning a few races this weekend” he says confidently. “It will be a case of having a strong qualifying result and fighting at the front end of the field from there onwards. My main aim is to end the weekend with the championship lead.”

Two drivers showed superb fighting qualities at Silverstone, with both Struan Moore (Lanan Racing) and Chris Middlehurst (Mark Godwin Racing) pulling off move after move to rise up the order across the weekend. Moore made up a total of 35 places in the two Sunday races to clinch a podium and a fifth place despite starting on the back row of the grid for both contests, while Middlehurst saw a 24 place gain to take a seventh and fourth after retiring from the first race. Both drivers are optimistic of front running performances this weekend, with 2013 McLaren Autosport BRDC Award finalist Middlehurst finding good performance gains in recent testing runs.

“I go to Brands with nothing to lose and I’m going to be on the attack all weekend” Middlehurst commented. “I need to make sure I qualify at the front, I can’t afford to be starting from the back again and need big points to move forward in the championship. I’ve raced on the Brands Hatch Grand Prix circuit in 2012 with Formula Renault and finished second there in the wet so I know I’m quick around there and with my knowledge of the track I should have an advantage. I’m looking forward to it; wins and podiums are the main aims.”

Brands Hatch is the local circuit for Ginetta Junior graduates Will Palmer (HHC Motorsport) and Tom Jackson (Chris Dittmann Racing). Both have experience of the full Grand Prix layout and will be expecting to put their knowledge to good use this weekend, with Palmer claiming a victory on the shorter Indy layout during F4’s Winter Championship last year and securing three top-eight finishes in the opening rounds to lie fifth in the standings. Dutchman Michael Claessens (Mark Godwin Racing) can also count Brands as his local F4 round as he resides in London, as do Hyman and Moore.