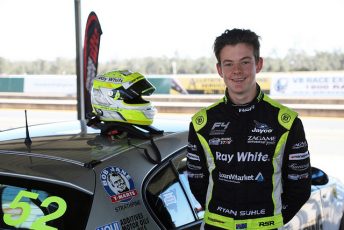 Young up and coming Formula 4 Star Ryan Suhle has made his ‘tin top’ debut at just 15 years of age by joining the Australian Production Cars field this weekend.

Suhle is competing at Queensland Raceway for what is round four of the 2017 APC season, in the #52 BM Racing BMW130i Class C entry alongside fellow debutant racer Christian Yates-Round.

After having been selected as a CAMS Foundation Rising Star in 2017, Suhle has been racing in the CAMS Jacyo Australian Formula 4 Championship this year with Zagame Motorsport and has so far made a strong impression with two pole positions and the honour of being the youngest race winner in the championship as well as in the worldwide F4 ranks..

“This is our first run in a tin top car – we have been in the CAMS Jayco Australian Formula 4 championship this year, so we thought we would have a run in the tin top to get a feel for something with a bit of weight,” Suhle explained.

“A great opportunity arose with BM Racing and here we are now. It has been a really good run so far, we did a test day just to get used to the car in general and so far it has all been going well.

“I was only racing here last weekend (with F4), so the track is fresh in my memory, and I am definitely pretty excited to be doing my first endurance race – especially given it is going to be at night, it is going to be a really new experience!

“So far, I have definitely enjoyed (my APC experience), so I don’t see why you won’t see me again (at future events)!”

Suhle is being joined in the driving duties for the #52 this weekend by Christian Yates-Round, who is making his own debut.

“For me I am sort of in my infancy with racing, this is my first race car and my first endurance meet,” Yates-Round explained.

“For Ryan obviously it is his first time in a car that is not an open-wheeler so he is learning about new ways and the different ways you need to handle these cars compared to what he is used to, whereas I am getting used to the whole concept of racing, and getting involved with it.

“I have always had an interest but didn’t know how to get into it, the boys at Motorsport Life – Karl Begg and Justin Anthony – got me into it and gave me the window in.

“I am absolutely a bit nervous and excited and a bit apprehensive with the whole unknown, there are a few things which are a first-time experience for me this weekend – ironically the ’15 year old’ has experienced it before, so I have actually been gleaning a bit from him from his experience (to get ready).”

Suhle and Yates-Round will face off against fellow Class C competitors, Supercars racer Todd Hazelwood and Scott Turner – who also are contesting a BMW130i this weekend – the two Renault Meganes of Osborne Motorsport and the Mazda 3 MPS of brothers Mitch and Leigh Naylor.

In total, 23 entries are taking to Queensland Raceway this weekend for round four of the 2017 APC season.

Tomorrow (Saturday 5 August) will host a fourth and final practice ahead of two sessions of qualifying and a 300km race held under lights. Sunday will feature a warm-up ahead of a further 300km of races, this time held in the afternoon. Spectator access is only $20 for Saturday or $30 for Sunday admission – a weekend pass is also available for $40.00. All of Sunday’s action will be streamed online live and free via thenationals.com.au