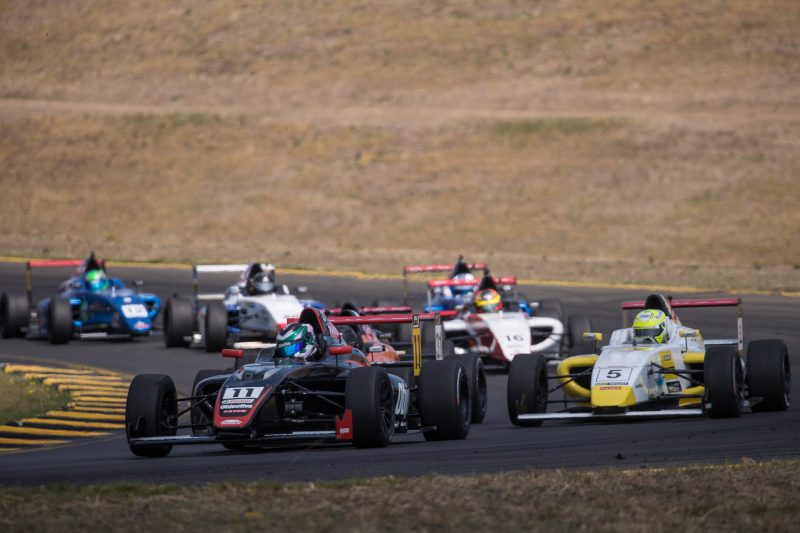 For the first time in its four-season history, the CAMS PAYCE Australian Formula 4 Championship will race on New Zealand soil at Pukekohe this weekend.

Supporting the ITM Auckland SuperSprint round of the Virgin Australia Supercars Championship, it is an exciting conclusion to a thrilling season for some of Australia’s best junior drivers.

Championship honours remain open with three races and a maximum of 75 points up for grabs, with AGI Sport’s Jayden Ojeda in the box seat to claim his first Australian Championship. Ojeda is 51 points clear of teammate Ryan Suhle.

“We’ll go to New Zealand with a bit of a lead, but it’s certainly not all over yet. We still have to perform and put our best foot forward to come away with the title at the end of it,” Ojeda said.

The battle for runner-up honours is closer, with Suhle 25 points clear of Team BRM’s Aaron Love.

In the Burson Auto Parts Rookie of the Year honours, Team BRM’s Lochie Hughes is equally poised to lock away that honour, sitting 66 points clear of teammate Zayd Tones and 68 ahead of Patrizicorse’s Jackson Walls.

“I’m really excited, it’s a track no-one’s driven on before so hopefully it plays an advantage to me like in Tasmania so it’s a bit more equal terms,” Hughes said.

“Hopefully it’s a good one and we can get some good results.”

Championship leader Jayden Ojeda is also the most likely to win the Toyota Racing Series test day, after claiming all three race wins in the previous round at Sydney Motorsport Park.

The test day prize will be awarded to the driver who scores the most amount of points across the rounds in Sydney and New Zealand.

With Australian Formula 4’s first visit to New Zealand, naturally there is limited to no data for teams and drivers to reference for this round, with only a handful of drivers have had overseas experience outside of karting – Thomas Smith racing in New Zealand earlier this year and Aaron Love competing in Asia.

The cross-Tasman trip has also presented a set of unique challenges for the championship’s logistics, with teams having to compact their equipment into shipping containers throughout the previous couple of weeks.

All cars, team equipment and spare parts have since left safely to Auckland via sea after departing from Port Botany in Sydney thanks to Gibson Freight.

AGI Sport also generously assisted in the construction of frames and vehicle ramps to accommodate the storage of all championship cars into containers. The squad will also run Antonio Astuti’s entry, which has been usually prepared by Astuti Motorsport this season.

Following the final round, the championship will celebrate its season on Sunday evening with its prize giving ceremony in Auckland.

All times are listed in NZDT +13

Practice, qualifying and race sessions will be televised live in Australia on Fox Sports (Channel 506) as part of the Virgin Australia Supercars Championship support coverage. New Zealand will also be able to tune in to Formula 4 and Supercars live on Sky Sport 4.