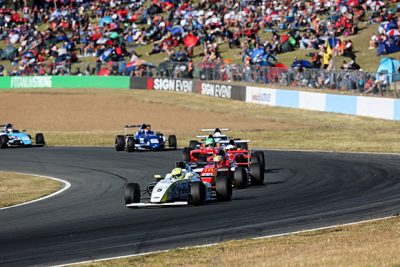 The round will play host for many Queensland based crews, which include Cameron Shields, Ryan Suhle, Lochie Hughes, Zayd Tones, Jackson Walls, Ardie Jonic and the Patrizicorse team.

Ojeda was in sublime form at the previous round at Phillip Island, claiming a clean sweep across qualifying and all three races. Both Ojeda and Shields share Castrol Pole Position honours so far in 2018.

With almost a two-month gap since the Phillip Island round, some Formula 4 drivers took the opportunity to attend the CAMS Academy camp on the Gold Coast. The drivers acquired new skills across physical training, mental preparation and getting to know their fellow racers in a social setting.

Last year’s Queensland round was claimed by the season’s eventual champion Nick Rowe of AGI Sport, with Shields and Suhle joining him on the podium.

The first practice session will commence at 9:25am (AEST) this Friday, with remaining sessions to be televised live on Fox Sports (506).

Qualifying and all three races will be televised live on Fox Sports 506 as part of the Virgin Australia Supercars Championship’s support coverage.

*Information correct at the time of distribution. Check formula4.com.au for rolling coverage across the weekend.