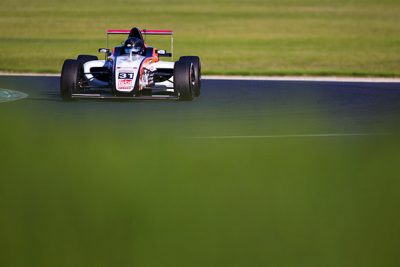 Set in the morning’s first session, Ojeda’s 1:34.0749 was not eclipsed in the afternoon’s sunnier session.

“I was pretty happy with the car most of the session,” Ojeda said.

“AGI Sport put together an amazing car. I’m really happy with it. First time being in first in Australian Formula 4 – hopefully we can push on.”

Championship leader Cameron Shields was quickest in the second practice session, ahead of his nearest title rival Ryan Suhle.

“It’s looking like it’s going to be a really good weekend,” Shields said.

“To come out of practice now topping the charts, and the last one, is certainly very promising. No doubt I’m going to make some changes and go quicker again in qualifying.”

Suhle is the defending Castrol Pole Position winner from last year’s Phillip Island event, and will be eager to add to his win tally at the venue.

“Yeah I’m pretty happy. Cameron got a bit of a sneaky tow off us for one lap – so I’m hoping that’s his fastest lap!” Suhle said.

“I feel strong and I think in qualifying I can go out and set a fast lap. I’m pretty excited just to get out there tomorrow, aiming for pole most definitely for both races… that’s the go.”

Patrizicorse’s Jackson Walls was the fastest Burson Auto Parts Rookie, with fifth place in practice two showing his and the team’s potential this weekend against the established squads.

“There’s a bit in me to improve, and a bit where we can improve the car,” Hughes said.

“There’s a big headwind so a slipstream should make a big difference, but if we can get everything sorted we should be alright for tomorrow.”

Consistency was key for Aaron Love in the opening round in Tasmania, and he’s again shown that form in Friday – setting the fourth fastest time across both sessions.

“Definitely made some progress, but I think we’ll be more up there in qualifying tomorrow,” Love said.

“I’d like it to rain maybe if I had made a few mistakes in the race. I’ve done some testing here in the rain and I’m pretty confident.”

Newcomer to the CAMS PAYCE Australian Formula 4 Championship Ardie Jonic also steadily improved across Friday practice, to only be less than two seconds off the fastest in practice two.

Jonic this weekend partners Ojeda and Suhle in a third AGI Sport prepared car, in what his is first Phillip Island race in his speedway background.

AGI Sport are no strangers to speedway-to-circuit converts, with 2017 Champion Nick Rowe the squad’s proudest graduate.

“I found it to be a lot different with the way you have to drive the car. It’s definitely a lot harder than speedway. I’m looking forward to expanding my driving abilities,” Jonic said.

Qualifying for the Castrol Pole Position will commence at 11:55am (AEST) on Saturday, followed by race one at 3:05pm. Live timing will be available on formula4.com.au, with a free live stream of the remaining two races on Sunday.