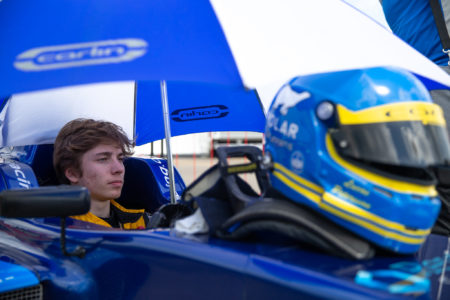 Fresh from a campaign in British Formula 3, 18 year old Swedish racing driver Lucas Petersson is the second driver to be confirmed for the 2020 Castrol Toyota racing Series in New Zealand and will race for new-look team, mtec Motorsport engineered by R-Ace GP.

Petersson – who had been based in Dubai before moving to the United Kingdom – began his racing career in karting in 2008. After multiple wins over several seasons, he was crowned Junior Max class champion of the United Arab Emirates Rotax Max Challenge in 2017. He then decided to step up to single seater racing cars, moving into the FIA F4 UAE championship.

He adapted to cars quickly, taking two wins, a pole position, five podiums and three fastest laps in his first season and ended 2018 fourth in the championship standings. For 2019 he moved to the hugely successful Carlin Motorsport team and a campaign in the BRDC British Formula 3 championship. During a highly competitive season he took one win and a fastest lap at the second round at Snetterton.

Looking forward to continuing his development in the junior formulae and the forthcoming New Zealand championship, he explained: “What a great way it’s going to be to start a new year!

“I’m really happy to be heading to New Zealand for the 2020 Toyota Racing Series and joining mtec Motorsport. The new partnership they have entered into with R-ace is very exciting and I hope will give us a competitive edge going into the season. Like all series I have competed in, there are a lot of things which I’m going to have to get on top of, such as new circuits and a new car but I can’t wait to get going and give it my best effort.”

With its new Tatuus-based 280 horsepower turbocharged FT-60 chassis, there has been plenty of early interest in next year’s TRS series, with drivers signing up months earlier than previous years. It is expected a full grid of 20 cars will be on the grid when the five weekend championship gets underway.

Team Principal Bruin Beasley is pleased with his first signing for the championship, adding: “Having Lucas on board for our 2020 campaign is exciting for mtec. We have worked hard to put a strong programme together and Lucas’s ability and dedication to the task is just another positive part of it. We look forward to working with Lucas and his team to achieve podiums come January.”

The 2020 championship will begin at Highlands Motorsport Park in Cromwell in New Zealand’s South Island over the weekend of January 17-19. It stays in the South Island for the second round a week later, moving to Teretonga Park near Invercargill for round two.