When you mix a relatively new team to Sprintcar racing and a driver with over three decades worth of experience, it’s a win-win situation, which is exactly the case with Team Pitt Racing linking up with multiple Tasmanian Sprintcar Champion Adrian Redpath. 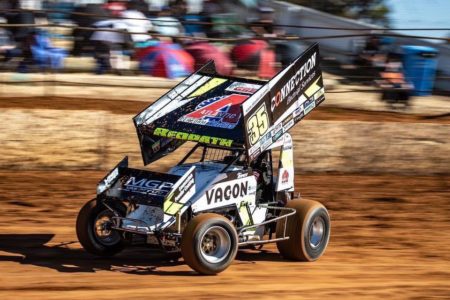 After making a cameo appearance with Team Pitt Racing for last season’s Tasmanian 410 Sprintcar Title, Redpath during the most recent off season, which saw him depart from his previous team, agreed to run with the team on a full-time basis for the entire 2019-20 season.

Since the beginning of the season, Redpath and Team Pitt Racing has been on the pace and it has resulted in them picking up a pair of feature-race wins, with the most recent being last Saturday night at Hobart Speedway ahead of his brother Jason in second, and as a result of this form they are currently leading GBE Sprintcar Series point standings.

Despite the solid performances, there has been some tough breaks for the Redpath and Team Pitt Racing duo, which has forced them have to revert back to a 372ci engine following them damaging their main 410ci engine earlier in the season, and also having to contest the state’s biggest event – the recent Australian Championship at Latrobe Speedway – well down on horsepower. Despite the horsepower disadvantage, they came away from their Australian Championship campaign with their heads held high, after they were unlucky not to have made Saturday night’s feature race following them missing out on a transfer spot by a single position in the B main.

With the main 410ci engine aboard the Tas # 35 Atlantic Oils / Pro Dig Earthworks supported Cool car not too far away from being available to use, the plan for the rest of the 2019-20 season to remain at the pointy end of the GBE Sprintcar Series point standings.

Bruce Pitt, who is the owner of Team Pitt Racing and the team’s previous driver, is very pleased with being able to have a driver of Redpath’s calibre in his corner.

“Since stepping into Sprintcar four seasons ago, it’s been quite a tough learning curve and although we were going OK, we were still lacking a bit of experience in vital areas,” Pitt explained.

“Adrian been a massive boost to our team with him helping us learn more about Sprintcar racing and have a lot of fun along the way, so it’s definitely a win-win for both parties.”

Redpath, who was without a drive heading into this season, has also been enjoying working with Team Pitt Racing.

“Bruce and his family team are all eager to learn more about Sprintcar racing and I’ve been happy to share my experience with them through joining the team as their driver,” said Redpath.

“Apart from having fun at the track, we have all gelled pretty well and we have been able to come away with some competitive performances so far this season, which makes everything all the more enjoyable.”

Currently enjoying an impressive debut season campaign together, Redpath and Team Pitt Racing have recently agreed to terms for the 2020-21 season, which will not only see them compete the entire local schedule but also venture onto the mainland to contest various major events, such as the Grand Annual Classic at Premier Speedway in Victoria.

The next appearance for the Redpath and Team Pitt Racing duo is going to be at Carrick Speedway for this Saturday night’s latest GBE Sprintcar Series round.