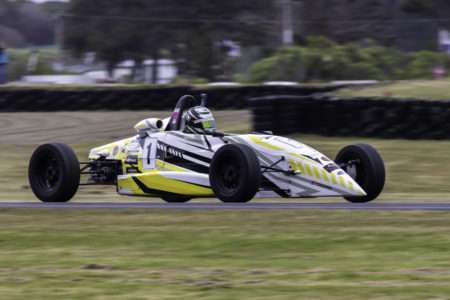 Alex Crosbie of Invercargill in his Ray GR21 on his way to the round win and series lead in the South Island F1600 Championship at Teretonga Park. Picture: Vanessa Adcock

The South Island Formula 1600 races were beauties and by the end reigning National Champion, Alex Crosbie of Invercargill in his Ray GR21, had won the round and taken the lead in the championship. Crosbie and the previous series leader Blake Knowles of Prebbleton (Van Diemen RF05) battled hard all weekend but after Knowles crossed the line first in Saturday’s contest, he was penalised for a safety car restart infringement, dropping him to tenth. That handed Crosbie the win and two-second placings behind Knowles on Sunday gave him the round win from Daniel Brown of Christchurch in another Ray and Knowles.

In the Pre 78 Classic Saloons Ford Mustangs led the way with Leon Hallett of Mosgiel taking two wins and Te Anau driver Rodger Cunninghame one while Murray Kelman of Invercargill won the handicap race in his Ford Escort TC. It was Cunninghame who took the top step of the podium after the points were tallied.

It was close too in the OSCA Super Saloon races with Dunedin driver Steve Ross in his Jaguar Tranzam XK taking overall honours after winning two of the four races. He accumulated 106 points, one more than Palmerston North driver Cameron Jones in a Mazda RX7 with Kyle Dawson of Invercargill in his Nissan Skyline third, a further point behind.

Liam MacDonald in his Falcon took the top step of the podium in the Noel McIntyre Drainage Club Saloons winning three of the four races with Jordan Michels winning the other to leave him the runner-up for the weekend with Harry Wilson and Jeremy Dawson tied for third overall.

Timaru drivers filled the podium in the SS Cup with James Liemburg taking victory in his 5.7 litre Mazda MX5 from Jared Hanson in a 2-litre turbo Datsun 1600 with Will Kitching third in his Mazda RX8. Hanson and Kitching were tied on points, but Hanson took second by setting a faster lap time during the round.

There was a similar situation in the 2K Teretonga Challenge where Toyota Levin drivers Hamish Evans of Darfield and Harry McDonald of Otautau shared two wins each and finished runner-up to each other in the other two races. They were separated on the fastest lap time which went to Evans by the barest of margins to give him the round.

Paul Clarke of Mosgiel won the Pre 65 Saloons in his Ford Mustang from Corey Ross of Rolleston in another Mustang with Invercargill driver John Smolenski third in his XP Falcon one point ahead of fellow Southlander John Mackley while Will Kitching took the PRO 8 South Island honours from Sam Wallace of Christchurch.

Justin Neill of Christchurch won the Mini 7 South class from Adam Box of Rolleston and Daniel Lamb of Kaiapoi while Cody Welch of Omakau in his Falcon dominated the NZ Six Saloon races ahead of the similar car of David Worgan (Methven) and Mike McCarthy of Dunedin in a Commodore.

International motor racing returns to Teretonga Park next month when the Toyota Racing Series featuring some of the world’s best young drivers visits from 20-22 January, followed by the Star Insure Classic SpeedFest from February 17-19.