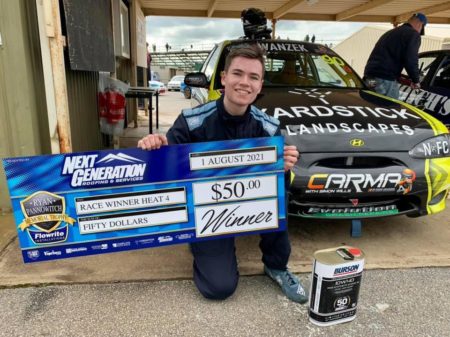 While he is only 17 years of age, Wanzek has been a regular race winner in the South Australian Excel Series for the last few seasons, finishing runner-up in the 2020 title race.

Wanzek said he and his father identified the Toyota 86 Series as a logical progression pathway, and were attracted to the professionalism of the Tekworkx outfit.

“The Toyota 86 Series is the next step up from Excels – the cars are rear-wheel-drive and they’re a bit faster, but it’s still a one-make series with very close competition and a lot of good drivers,” Wanzek said.

“There’s also the advantage of competing alongside the Supercars Championship, racing at some high-profile events and benefiting from TV coverage.

“When we were looking at options for teams to run with, Tekworkx attracted us because they’re professionally presented but they’re also family-orientated, so their environment is friendly and positive.

“They also run cars in other categories like Carrera Cup, so there are career progression pathways within the Tekworkx framework.”

As part of the Tekworkx squad, Wanzek will receive driver coaching from Bathurst 1000 winner Luke Youlden and former T86RS Champion Tim Brook. After completing a test day with the team, he is already appreciating the benefits.

“I understand the advantages of having a driver coach, because Simon Wills was working with me in the Excels and taught me a massive amount,” Wanzek said.

“In my first 86 test day, the Tekworkx driver coaches were on hand and it really accelerated my learning curve, so I’m looking forward to working with them throughout the season.”

Tekworkx team owner Rob Woods said Wanzek has not only established himself as a promising on-track prospect, he has also impressed the team with his off-track attitude.

“Jayden may be only 17, but he presents himself with maturity and professionalism beyond his years,” Woods said.

“Out of the car, he is an articulate, intelligent and confident speaker – those qualities will make him a valuable asset to Tekworkx before he even gets behind the wheel of the race car.

“His eagerness to learn and improve gives us confidence he will be achieving some impressive results on the track as well, so we’re very excited to have him on board.”

The full calendar for the 2022 Toyota 86 Series will be announced shortly.