Everything you need to know about pole dancing: Welcome to Rally Poland

Everything you need to know about pole dancing: Welcome to Rally Poland 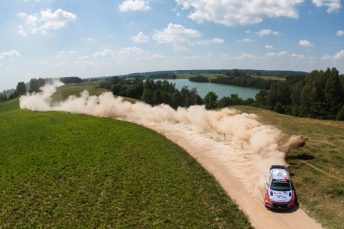 No, we’re not going to teach you how to gyrate on a pole: instead how to make cars dance on the ultra-rapid roads of Rally Poland. Read on for our guide to one of the quickest events on the entire World Rally Championship, broadcast live by Red Bull TV.

Based in Mikolajki, 160 miles north of Warsaw, Rally Poland marks the start of the second half of a season that has already produced five different winners from the opening seven rounds. It’s one of the Championship’s fast, loose surface events and has a passionate following by thousands of fanatical spectators. Sandy roads lined with tall grass make visibility on the approach to corners tricky, and corner cutting risky.

Points leader Sébastien Ogier, Toyota’s newcomer Esapekka Lappi and Citroën’s latest acquisition Andreas Mikkelsen are the only three previous winners on the entry list. Ogier won in 2016 and 2015, Mikkelsen in 2016 after long-time leader Ott Tänak faltered on the final stage while Lappi’s victory came back in 2012 when the event was a round of the FIA European Rally Championship.

1. It’s the second-oldest rally in the world, after Rallye Monte-Carlo. The first edition of Rajd Polski (as it was called then) was run in 1921.

2. Average speeds on the stages have been more than 80mph in the past, and with the new generation of World Rally Cars being even faster, they could exceed that this year. We’re talking serious speed: in 2016, Ott Tanak won the 21.14-kilometre SS8 at an average speed of 80.06 mph.

3. While the speeds are as fast as Rally Finland, the surface is a bit trickier: rather than the hard and compacted gravel roads of the Nordic classic, Polish roads have a softer and more sandy base.

4. One of the most unpredictable battles in WRC history resumes, with the gap at the front between Sebastien Ogier and Thierry Neuville closing up, third-placed Ott Tänak homing in fast, and Andreas Mikkelsen stepping in for Kris Meeke after a troubled start to the season for Citroën.

5. Almost a third of the route is brand new this year, with Saturday’s action taking the crews close to the Russian border. You can watch the live stage (SS15, Baranowo 2) at 12:50 on redbull.tv/wrc as well as a daily highlights show from Friday to Sunday at 21:00.