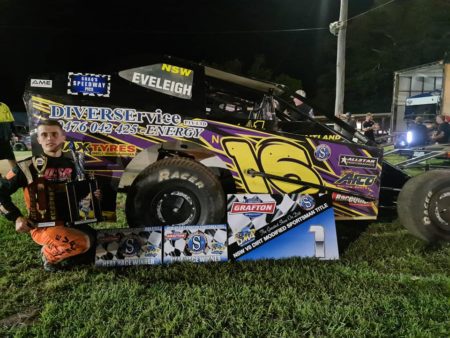 In Friday night’s NSW Title for the V8 Dirt Modified Sportsmans class, youngster Blake Eveleigh, who had travelled from East Maitland in the Hunter Valley region of the state, lived up to his favouritism by coming away with an impressive win in the feature race.

The current Australian Champion in the V8 Dirt Modified Sportsmans class was the form driver throughout the qualifying events and he then backed it up by dominating the 25-lap feature race and defeated Mark Griffith in second and impressive newcomer Owen Scott in third. The top-five finishers were completed by Darren Todd and Steve Edwards. The best of the local competitors was Taylah Firth, after she finished just outside the top-five finishers in sixth.

Carlson, after recording a pair of second-place finishes and a 10th in his three 20-lap heat races, came out on top in the 40-lap feature race ahead of Jakob Lesha and Trent Dhu in second and third place respectively. The form driver of the night Chris Corbett, who had won all three of the heat races earlier in the night and was the highest qualifier heading into the feature race, missed out on the top step of the podium and ended up fourth after opting to take the rear-of-field challenge for a bonus $500. Corbett had worked his way from the back of the field and was looking good for the win, but in the end, he had to settle for fourth. Adam Grill finished just behind Corbett in fifth place.

The 2020-21 season finale for Grafton Speedway is going to be held on the Saturday night of May 22. This event will be headlined by the popular V8 Dirt Modifieds and the NSW Modlites Title, along with the support classes of RSA Street Stockers, Production Sedans, AMCA Nationals, RSA Four Cylinder Sedans and RSA Junior Sedans.

Grafton Speedway would like to thank Hession’s Auto Parts for their support throughout the 2020-21 season. Based in Grafton, along with their new store location in nearby Coffs Harbour, Hession’s Auto Parts stock a wide range of parts and accessories at competitive prices.