Evans back on top

Evans back on top 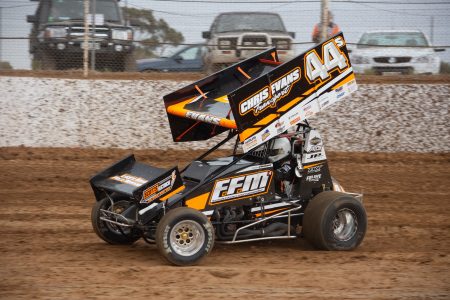 Continuing what has been an impressive start to the 2018-19 season last Saturday night at Waikerie’s Sunline Speedway, Daniel Evans proved that his maiden SA 360 Sprintcar Title victory was no fluke, repeating history and recovering the mantle.

Having gotten his season underway in the best possible fashion by winning the opening All Star Series round at Mildura’s Timmis Speedway and placing third in round two, Evans’s fortune took a turn for the worse during round three when he blew an engine, but he bounced back in the best possible way during last Saturday night’s South Australian Title, which doubled as the fourth round of the All Star Series.

Lining up for the 30-lap feature race in pole position, the Renmark, South Australia-based driver didn’t quite get the start he was hoping for, being pipped by Mark Caruso at the drop of the green flag; however, he was in prime position to take over the lead just four laps later. Doing well to hold off second-placed Brendan Guerin, Evans didn’t miss a beat, going on to collect his second win of the season.

Not only did the victory see Evans reclaim the SA crown, after initially winning the 2016-17 season running of the event at Bordertown’s Tolmer Speedway, it also saw him maintain his front-running position in the All Star Series point standings, where he currently sits in second, just one point shy off the lead.

“I consider Waikerie to be our home track, so to win the South Australian Title here means a lot to us as a team and it’s definitely an achievement that I’m very proud of,” expressed Evans, who scored a win and a fourth-place finish in his heat races, following qualifying fourth fastest in time trials.

Giving credit where credit’s due, the 22-year-old racer was quick to attribute this season’s success to former leading Sprintcar driver Trevor Green, who has joined the team as a crew chief and driver mentor this season.

“Having Trevor on board this season has made a huge difference to both the team as a whole and me as a driver,” enthused the SA # 44 Chris Evans Transport / Scott’s Electrical supported Maxim driver.

“The biggest improvement has been our consistency, which we’ve struggled with in the past. The fact that Trevor was a driver himself has meant that he’s been able to help me with my approach to driving, in addition to our car setup, which has been invaluable.

“I have to say a big thanks to Trevor, along with his mate Mally, who has been helping out with our tyres.”

Returning to Timmis Speedway on January 5 for the fifth All Star Series round, Evans hopes to experience more success at the track that has been a happy hunting ground for him in the past, before travelling to Simpson Speedway for the $10,000 to Win All Star Challenge on January 12.

Planning to contest approximately 25 race meetings throughout the 2018-19 season, including the Australian 360 Sprintcar Title at Kalgoorlie International Speedway in the gold fields of Western Australia on March 16, while chasing the All Star Series, Evans’s season will also consist of selected 410 Sprintcar race meetings, such as the Grand Annual Classic at Warrnambool’s Premier Speedway (Vic), the Kings Challenge at Mount Gambier’s Borderline Speedway (SA) and the Easter Trail, which will be fought out over three rounds at Geelong’s Avalon Raceway, Borderline Speedway and Premier Speedway from April 19 to 21.

Evans would like to thank the following 2018-19 season sponsors for their continued support: Chris Evans Transport, Scott’s Electrical, Lucy’s Renmark Plaza Newsagency, Scotcher Race Fuels & Oils, and Tough As Motorsport. He would also like to give special thanks to his mum and dad Jane and Chris, his sister Lucy, Trevor Green, Mally, Scotty, Phil, and Daniel’s girlfriend Sarah.

To find out more about Evans and his team, LIKE them on Facebook by searching Evans Family Motorsport.