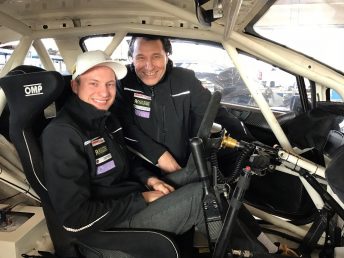 Eriksson – who won Germany RX following an epic overtake on turn one of the final – commented: “I am very excited to join MJP Racing Team Austria and to be able to compete full-time in 2017. Driving for the team alongside Timo Scheider makes me feel fantastic. I’ve seen what they have done with their new 2017 Ford Fiesta RXS and it will be amazing to drive this machine. Thanks to the team and their sponsors for giving me this opportunity.”

Germany’s Scheider, who also won the 24 Hours of Nurburgring, added: “I am very excited to join MJP Racing Team Austria – we had been talking since some time. Rallycross encompasses for me the great passion of motorsport. The level of the Championship goes up in 2017 with more manufacturers entering, but MJP Racing has built a new car for 2017 that will be a serious contender. They not only have great dedication but also employ a high-tech approach to designing and building race cars that is unique. We found ourselves to be very compatible as partners and I look forward to a fantastic season.”

Team owner Max J. Pucher concluded: “Last year we reached semi-finals regularly and the fact that we placed third and fourth in Barcelona final showed how competitive both the team and the cars are. Having Timo Scheider with us in the team is just fantastic and makes all of us in the team really proud and Kevin is the perfect match for Timo. The combination of DTM experience and World RX makes for one of the strongest driver pairings in the 2017 Championship. As much as I would have liked to have Alex Wurz as an Austrian counterpart to Timo he unfortunately was unable to commit to a full season. We have reached our ultimate goal of stepping up our game both in drivers and cars. Barcelona RX, here we come!”

The 2017 World RX season kicks off in just over seven weeks’ time with the World Championship travelling to the Circuit de Barcelona-Catalunya for the season-opening World RX of Barcelona.