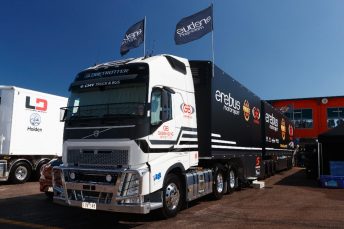 With just over two weeks until the Townsville 400, Erebus Motorsport will send their Supercars transporter straight to North Queensland, rather than heading back to their Melbourne workshop.

The transporter will also stop at Malouf Holden in Mount Isa, where the cars will be on display the weekend leading into the event.

With that in mind, they have had to be organized with spare parts and have all bases covered for what is essentially a double-header.

“We had a pretty good weekend in terms of damage, we stayed mostly out of trouble,” Erebus Motorsport’s General Manager, Barry Ryan, said.

“Heading into Darwin and knowing the truck’s not coming home, we had to make sure we were equipped with enough spares in the truck to get us through both weekends.

“You always have a backup plan in case something does go wrong but the team have worked hard in the break leading up to it to ensure we are prepared.”

The team will now spend a couple days in Darwin, to prepare for the next event.

“We are here until Wednesday, so we’ll spend the time servicing the car the same way we would in the workshop, it’s really no different to any other round,” Ryan said.

“It’s also the perfect opportunity for the team to have a bit of time off while the cars are not in Melbourne.”

The transporter and cars will be at their new home up until the Townsville street circuit is opened up.

David Reynolds will also be at Malouf Holden on Saturday 1st July, before the Townsville 400 kicks off.