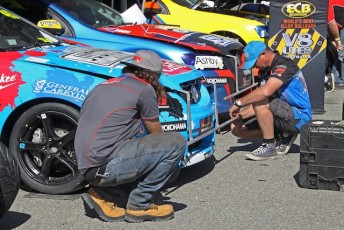 Driver Craig Dontas is really excited about the initiative, which has been running since the last round in Perth.

“At each and every round we now give two lucky apprentices from the industrial and automotive trade the opportunity to work on the team and be a part of Australian V8 Ute Racing.

“So far the scheme is going great guns … We are trying to give back to the sport and industry by creating passion for the next generation,” Dontas explained.

The fortuitous apprentices not only gain the experience from working alongside a professional racing team, but are also decked out in the Just Car Racing Team Uniforms as well as receive JBS Hand Tools.

“At the track they are involved in the running of the car under the guidance of Jake and the team. They work on everything from changing wheels right up to wheel alignments and other important tasks. They are inducted as a member of the team, they eat with us, are included in team meetings and enjoy the highs and lows,” said Dontas.

Head Mechanic of the Just Car Racing Team, Jake Stoneman was really pleased with Sean Price and Byron Riches who were given the opportunity in Perth.

“Both Sean and Byron did a great job over the weekend, they were really attentive and willing to work on the car, from keeping it spotless on the outside and assisting me with the spanners on the inside, hopefully they walked away with a lot more experience then what they came with,” said Stoneman.

There are still six more opportunities to be a part of the Just Car Racing Team with the next Round to be held in Darwin at the Sky City Triple Crown, Hidden Valley Raceway, 19 – 21 June.

Dontas is currently running 10th in ARMOR ALL Drivers Championship with other Erebus Motorsport teammates Kim Jane in eighth and Adam Marjoram in 2nd.

In 2015, all V8 Ute practice, qualifying sessions and races will be broadcast live across a combination of the Fox Sports and TEN platforms, with digital coverage through Foxtel Go.

International coverage has been extended to include over 40 countries. The series will feature 24 races over 8 rounds, all on the V8 Supercar calendar.