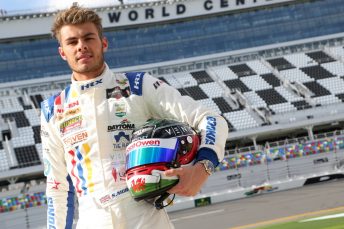 MEDIA RELEASE: Rolex 24 rookie Seb Morris left an indelible impression on the prestigious twice-round-the-clock encounter at Daytona International Raceway in Florida over the weekend, 28th/29th January, with a truly memorable performance behind the wheel of the No.31 Cadillac DPi-VR prototype.

Competing as part of the crack Action Express Racing squad alongside Eric Curran, Dane Cameron and Mike Conway, having been awarded the drive as his prize for winning last year’s Sunoco Whelen Challenge, the 21-year-old Welshman more than played his part during the demanding encounter.

Making marked progress during the build-up to the event, with the help of his vastly experienced team-mates and the crew at Action Express Racing, Seb turned heads during his maiden race Stateside and first ever twice-round-the-clock contest – leading the action during the early going.

Taking the lead of the race at the three-hour mark during his first stint on Saturday afternoon, when he returned to the contest for his second run later in the evening the heavens had opened and he reveled in the wet conditions, circulating at up to four seconds per lap quicker than his challengers.

Sadly, hopes of a potential podium result faded as a result of a series of issues which struck the No.31 car. First, contact from a backmarker when team-mate Curran was at the wheel led to an enforced pit-stop and triggered the beginning of a run of misfortune.

More dramas arose as the race unfolded, including a lengthy delay in the pits to facilitate repairs for problems which were a legacy of the initial incident. Into the second half of the race, more laps were lost when the Cadillac developed shifter problems but the pace and potential of the Action Express car was undeniable. In the end, the car took the finish sixth in class and in 14th position overall.

“I think it’s been the most hectic week of my life in terms of the preparation, the intensity of everything and just what you have to do while you’re in the car”, said Seb, “It’s so different to anything I’ve done, you’re constantly talking to the team, in open dialogue with the spotters around the track, and there is so much to concentrate and focus on. It’s incredibly demanding mentally.

“As I learnt during practice, by the time I got to the race I’d ironed out any little mistakes. There has been so much to learn, and so much still to learn, but everything went as well as I could have hoped and the team did an amazing job, they’re so professional.”

He added: “I think the team could see I was going to play the team game from the outset, they only needed to offer me two hours in the car in practice but I got double that. I can’t thank all of the guys enough, everyone at Action Express and Whelen, Anders [Hildebrand] at Sunoco, Dan Chapman and Andy Meyrick for the guidance and support – a massive thank you to all of the people involved.”

Qualifying second fastest for the 55th Rolex 24, the No.31 Cadillac was started by Cameron and he moved into the lead towards the end of the opening hour before staying behind the wheel after the first round of stops.

Seb then climbed aboard for the start of a lengthy triple stint, the quality of which certainly belied his status as a Rolex 24 rookie. Holding second place when a Full Course Yellow cautionary period was called following an incident, as the action resumed at the start of the third hour race leader Jeff Gordon, multiple NASCAR Champion, was involved in a tangle with a car emerging from pitlane.

Happily sweeping past into the lead of the race, Seb immediately pulled away and the Marford driver built up a lead of well over 20 seconds as the contest entered hour four. While misfortune ultimately spoiled the team’s hopes, the experience gained will stand Seb in good stead.

“It was the race of my life, the week of my life, and I’ve never had so much fun”, reflected the MSA Team UK driver, “Hopefully my performance has helped to raise my stock for whatever we do next, leading the 24 can’t have done me any harm!”