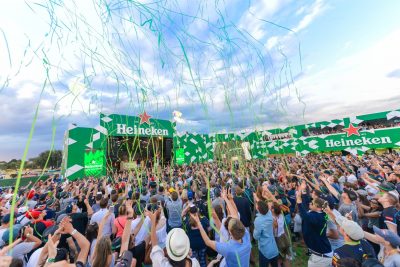 RnB Friday presented by FOX FM, will return for a second year with headline artists including; internationally renowned RnB performers, Diana King (Jamaica), Fatman Scoop (USA), Jay Sean (UK) and Heather Small – Voice of M People (UK) all set to perform. Fans will be treated to some of their biggest RnB classics such as ‘I Say a Little Prayer’, ‘Do You Remember’ and ‘Moving On Up’.

Heineken® Saturday will also be a popular fan favourite once more, with headline acts The Black Eyed Peas DJ Set feat. Apl.de.ap and Taboo with special guest Jessica Reynoso set to wow fans – plus an epic line-up of support talent to be announced in the coming days.

Australia’s best local music acts, including Melbourne rock band, Kingswood, as well as Sydney based band, Furnace and the Fundamentals, will round out the stellar music line-up performing on the main race day.

Please see below for the line-up of headline acts:

AGPC, General Manager – Motorsport, Entertainment and Industry, Craig Fletcher, is incredibly excited about this year’s music offering and the opportunity to showcase some of the finest home-grown and international talent to Formula 1® fans.

“Melbourne is synonymous with sport and live music. To be able to bring these two passions together at the Formula 1® 2018 Rolex Australian Grand Prix and to celebrate all that is great about Melbourne is not only a fantastic result for the event, but more importantly our fans,” said Fletcher.

“We pride ourselves on the fact that our music line-up is accessible to all fans, including general admission ticket holders. There is no doubting that a day at the Formula 1® 2018 Rolex Australian Grand Prix is fantastic value for money,” continued Fletcher.

The Heineken® Village will provide fans the perfect opportunity to sit back and enjoy the incredible music, whilst also enjoying all the on-track action on the super screens.

DIANA KING (JAMAICA)  “The Formula 1® Rolex Australian Grand Prix is an iconic global sporting event which is renowned for providing a first-class entertainment experience. I can’t wait to arrive at the Albert Park Grand Prix Circuit and meet all the fans.”

FAT MAN SCOOP (USA)“My Australian fans have always been so supportive of my music, so when offered the opportunity to perform at the Formula 1® 2018 Rolex Australian Grand Prix, I jumped at the chance.”

JAY SEAN (UK)”I love my fast cars so there is no greater honour than being asked to perform at one of the world’s most prestigious racing events. I am so excited to be coming to Melbourne to perform in front of my incredible fans and hopefully I might even see fellow Brit, Lewis Hamilton on top of the podium!”

HEATHER SMALL – VOICE OF M PEOPLE (UK)“Bring it on! I am thrilled to be part of the Formula 1® 2018 Rolex Australian Grand Prix music line-up. I can’t wait to hit the Heineken® Village stage and get the crowd pumping.”

KINGSWOOD (AUS)“Main man ‘Danny Ric’ is a big fan, but he’s so busy, he’s never been able to make one of our shows. We couldn’t be happier to play at the Australian Grand Prix, so Dan, and the rest of the rev head gang, can join in on all the fun the world has been raving about.”

FURNACE AND THE FUNDAMENTALS (AUS)“We’re super excited to be performing at the Formula 1® Rolex Australian Grand Prix! Before we hit the Heineken® Village stage on Sunday, we’ll be cheering on our fellow Aussie, Daniel Ricciardo. Fingers crossed we see him on the podium!”