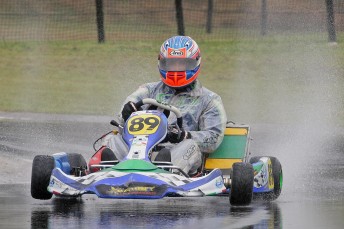 Promoter Steve Brown has welcomed an entry boost which will see a healthy increase in the size of both the KZ2 and KZ2 Restricted class grids at the latest round of this year’s Pro Kart Series in Hamilton over the weekend.

“We’ll be pushing 20 in KZ2 and at least eight in KZ Restricted with another two keen but unable to make it this weekend. Add in our usual line-up in Masters and you’re looking at out best turnout yet,” Brown said this week.

Auckland-based international Daniel Bray continues to set the pace in the premier KZ2 class but a number of talented youngsters – including Chris Cox from Rangiora, Jaxon Evans from Australia’s Gold Coast and Luke Dobbs, Mitch Osborne and Mitch Evans from Auckland – are snapping at his heels.

And this weekend the field will be joined by four more well-credentialed young drivers, Thomas Joyes from Hamilton and and Aaron Wilson, Jake Pascoe and Connor Westbury from Auckland.

Making their first appearance in the new-for-2014 KZ2 Restricted class, meanwhile, are Jared McKenzie and father and son pair Simon and Connor Adams from Auckland and Troy Hopkins from Whangarei.

The KZ2 Restricted class was set up so that karters could either ‘learn the ropes’ or compete at a less intensive level than in the premier and very much pro-level KZ2 category and Steve Brown says the interest from the likes of Simon and Connor Adams and Jared McKenzie vindicates the decision to add it to the Pro Kart roster.

“What we felt was missing was a place where, if you like, you could get up to speed before you made the move to KZ2 or – perhaps – just ran in for the pleasure of being involved without always chasing those last one or two-tenths of a second. For Simon and Connor, as it is for the other father and sons we’ve got running in the series, the camaraderie is important, while for a guy like Jared (McKenzie, who wants to get into Masters racing when he turns 40) it’s getting back into it so he can hit the ground running next year.”

It’s been two years since the Pro Kart Series last had a round at Hamilton’s Agrisea Raceway opposite the city’s international airport and Brown says that it will be good to be back.

“Of any of the tracks we race at Hamilton is the one that requires the complete package. You need a good engine to make the most of the long start/finish straight, you need a chassis and a set-up that can handle the mix of fast and slow corners, and obviously, you need a driver who has the ability to win!”

This weekend sees action at the track both days with qualifying and the first three heats on Saturday and the remaining heats on Sunday. Heading into the round class leaders are Aucklanders Daniel Bray (KZ2) and Garry Cullum (KZ2 Restricted), and Tom Curran (KZ2 Masters) from the Hawke’s Bay.

The weekend’s Pro Kart Series round is the third of six with KartSport Bay of Plenty hosting the fourth over the June 07/08 weekend.