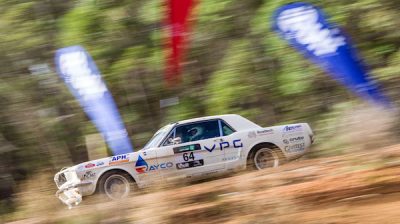 Entries are now open for the ninth edition of the Make Smoking History Targa South West tarmac rally that will take place in and around Western Australian south west towns of Pemberton, Manjimup and new this year, Northcliffe from 18th to 20th May 2018.

Held over two days competitors will travel over 380 kilometres in total which includes 130 kilometres of flat out competition on 22 closed-road Special Stages that range in distance from 3.11 kilometres to 15.13 kilometres through the spectacular Southern Forests area.

Targa South West Event Director Ross Tapper said that competitors are excited about some changes to the course.

“The addition of Northcliffe is new this year and there are two runs south and north on the Pemberton to Northcliffe road. The stage around Pemberton has also changed and that’s generating some exciting chatter amongst competitors,” Mr Tapper said.

Driver Andy van Kann who has who has competed in every Targa South West event and has checked the stages said the course this year has the best on offer.

“I’m excited to see the very best of the Gloucester stage chosen, I mean, what would Targa South West be without that rail crossing. The stage is now called Diamond Tree and is short and very exciting.

“Northcliffe is a fast flowing stage with lots of crests and dips and long sweeping corners through glorious forestry. It will require precise driver and co-driver teamwork as there’s no room for error over the narrow blind crests. It’s an awesome rally drive and run in both directions,” Mr van Kann said.

Competitors and crew can expect a warm welcome from the Northcliffe town folk with a service park and meal break in the main street of this romantic township.

Cars will start at 30-second intervals and race against the clock with the winner being the car that is fastest over all stages. Cars are grouped into classes and there are categories for Competition, Challenge and the new electric vehicle category.

“The automotive future is electric and we are receiving a fair bit of interest from WA dealers wishing to showcase electric cars in this environment – so we’ve included a new tour category for electric vehicles, a spirited enjoyable drive without the competition element,” Mr Tapper said.

“I encourage owners of electric cars to enter and enjoy a weekend in their cars along closed-roads – no experience is necessary.

“Make Smoking History Targa South West has a very relaxed atmosphere and provides a welcoming environment for first time rally competitors to learn the art of rallying and hone their driving skills without the pressure often associated with bigger events. Everyone who comes to Targa South West loves it.”

“The essence of motorsport is competition, but what sets rallying apart from other codes of motorsport is the camaraderie and sense of community – a group of like-minded car enthusiasts sharing a common experience – a spirited drive in some of the State’s most picturesque areas.

“Rookies are made to feel especially welcome because everyone in rallying wants to see the sport grow,” Mr Tapper said.

The Make Smoking History Targa South West fraternity will bring 400 people into the towns of Manjimup and Pemberton.

For more information on Targa South West including how to enter, please visit www.targasouthwest.com.au

Organisers would like to thank Targa South West sponsors Healthway, along with the Make Smoking History message, Shannons, Cutts Transport, Manjimup Truffles, AAAC Towing and the Shire of Manjimup for their support along with series sponsors Go Gear and Perth Motorsport Tyres.