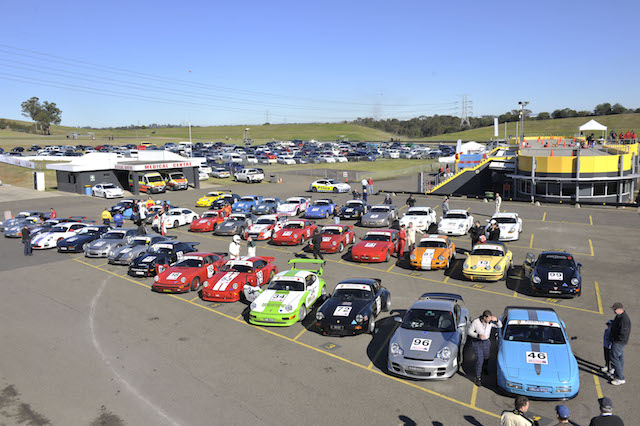 MEDIA RELEASE: Entries are now open to compete in this year’s Porsche Rennsport Australia Motor Racing Festival, to be held at Sydney Motorsport Park on April 29-May 01, 2016.

A significant change from the inaugural Rennsport is the move to a three day race schedule, allowing for greater track time for all categories.

Entries also open for the Porsche Show ‘n’ Shine, which was a spectacular static element to the inaugural event and will again feature some of the best examples of the Porsche sports car range, past and present.

Porsche Cars Australia’s Director or Marketing, Toni Andreevski, says there has been great interest from both competitors and spectators for this year’s Rennsport and looks forward to hosting Porsche enthusiasts at the Sydney event.

“We’re anticipating another fantastic turn out of Porsche racing cars for the second edition of Rennsport in Australia. The initial event in 2013 attracted a myriad of spectacular Porsches across Group S & N, Sports Cars, Regularity and Show ‘n’ Shine and we expect the very same this year,” said Mr Andreevski.

“Porsche has created fantastic road and race cars over the past seven decades and we’re lucky enough to be able to feature many of these locally based cars at Rennsport.

“We’re considered a strong enthusiasts market and the interest and participation for such an event proves this point – we’re enthusiastic about sports cars, motor racing and the Porsche brand.

“We are thrilled to invite those looking to compete to submit their entries. We have also received great initial interest from spectators, with strong initial ticket sales for the event.”

To submit your entry to be part of the 2016 Porsche Rennsport Australia Motor Racing Festival, visit the ARDC On-Line Entry System via www.smsp.com.au/competitor.