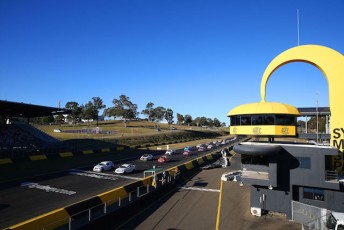 The finale of the 2016 Australian Production Car Series will be held
at Sydney Motorsport Park across November 11-13. pic: Nathan Wong

MEDIA RELEASE: With 10 weeks still to go until the finale of the 2016 Australian Production Car Series, entries and expressions of interest have been coming in thick and fast for the November 11-13, Sydney Motorsport Park event.

Category Manager Iain Sherrin notes 30 entries have already been received – making this officially the biggest round of the year for the revamped production racing series.

On top of that, a further 12 expressions of interest are on the books, and with many of those likely to enter and still 10 weeks to go until the event and eight weeks until entries officially close, Sherrin is encouraging anyone interested in taking part to get their entry in soon.

“We always seem to get an influx of entry confirmations at the last minute, so with 30 entries already received, a number of expressions of interest looking like they will convert to entries, and more enquiries coming in each day; the SMP grid is looking like it is going to be very strong, and perhaps even near capacity,” Sherrin said

“Having to worry about turning entries away due to no room is a great problem to have, but even if we don’t fill the large grid capacity (54), I am so very pleased with the support we are receiving from Australia’s production car community for our final round of 2016.

“It has been a big year for us, and this support and the fact we will end our season with our biggest field to date is very exciting as we look towards what will be an even bigger and better 2017 – including the Hi-Tec Oils Bathurst 6 Hour as part of next year’s soon-to-be-released calendar.”