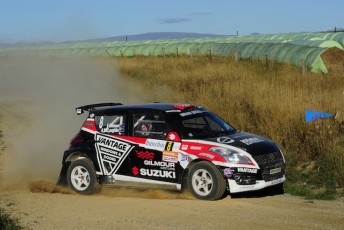 Not being able to start the Mahindra Gold Rush Rally of Coromandel due to problems with a new engine was not the way Emma Gilmour wanted to end the 2016 rally season, which included two podium finishes. pic: Geoff Ridder

MEDIA RELEASE: In a devastating turn of events, Emma Gilmour’s Mahindra Gold Rush Rally of Coromandel is over before it even began, due to problems with the new engine sourced for her Vantage Windows and Doors Suzuki Swift AP4+.

“After the engine blew up in Gisborne we got a brand new engine that we thought should be good for this event.

“Unfortunately it gave us problems from when we first fitted it and we haven’t been able to fix it – even though the team gave it a really good go. Needless to say we are gutted that we don’t have a spare engine to bolt in,” Emma says, from Whitianga, where the whole team is gathered.

Dunedin-based Emma and co-driver Anthony McLoughlin were sitting in second in the points’ standings going into this fifth and final round of the Brian Green Property Group New Zealand Rally Championship (NZRC).

“It is very disappointing as we would’ve loved to have finished the season on a high, with a win, and to have secured second in the championship,” Emma says.

The 2016 NZRC season has seen the team deliver two podium finishes – a win at the Lone Star Rally of Canterbury and a second at the International Rally of Whangarei in April.

“I’d like to say a big thanks to our team, our sponsors and our big team of supporters,” Emma says.

CAPTION Not being able to start the Mahindra Gold Rush Rally of Coromandel, due to problems with a new engine, was not the way Emma Gilmour wanted to end the 2016 rally season, which included two podium finishes. Photos: Geoff Ridder