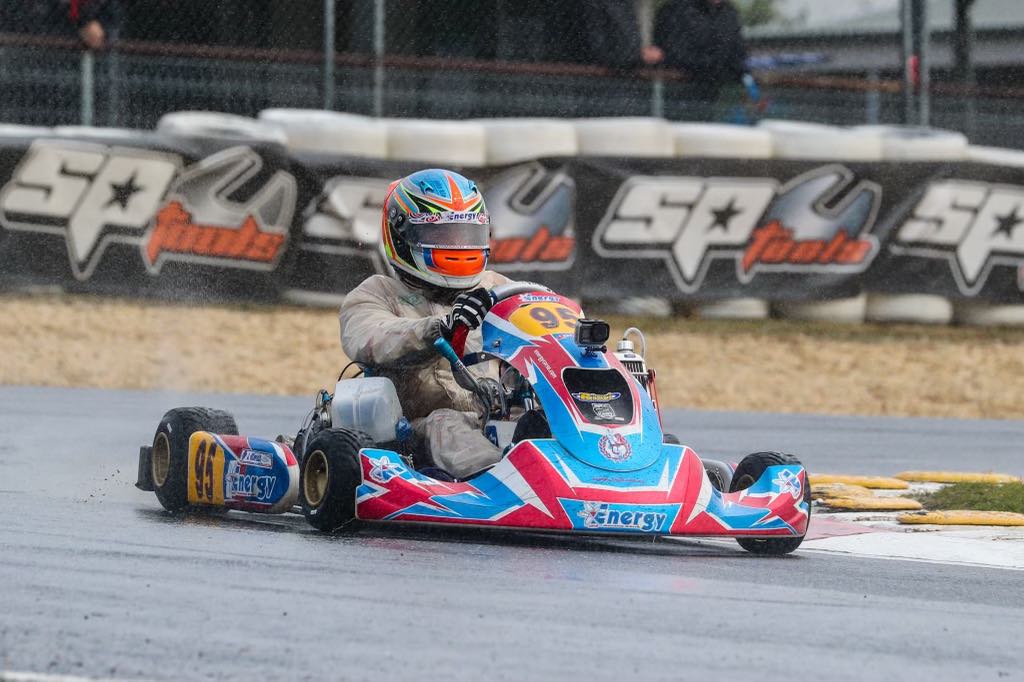 Energy Corse Australia took a team of eleven drivers across six classes down to the state of Victoria for the third round of the SP Tools Australian Kart Championship out of the Eastern Lions Kart Club. The team led by multiple time Australian champion Cian Fothergill were looking to continue their good start to the season. Coming of a double podium at the previous round of the championship, the team were all looking to put their best foot forward.

Jake Klarich and Chase Webster stepped out on the premier KZ2 gearbox class for the Energy Corse Australia team. Klarich led the way in qualifying setting the eleventh fastest time with Webster outside the top thirty and looking to move forward in the heats. Klarich did a sensational job to move forward in all four heats, highlighted by a fifth in heat two and a third in heat three. Webster moved forward thirteen spots across the opening two heats but DNF results in heat three and four had him starting down the order. In what was a wet and hectic final, Klarich gave it his all to come home in a strong position four overall. Webster was able to charge through the field and come home with his best result of the weekend in position twenty overall!

Kurtis Tennant was the sole Energy Corse Australia driver in KA3 Senior but that didn’t stop him having a huge impact on the class. Tennant qualified on the second row of the grid in third spot and was the driver to beat on Saturday, taking two heat wins and a second behind current Australian champion Jace Matthews. Tennant took another victory in heat four starting off pole position for the final. With a drying track Tennant made the tough call to put slicks on with the rain starting to fall once out on circuit. After such a promising weekend, Tennant had to settle for position twenty three in the final. Kurtis will be one to watch and the fourth round of the championship.

Cadet 12 had the triple Energy Corse Australia attack with Tyson Mcgill, Lana Flack and Caylen Burke all taking place in the near fifty kart field. Flack led the way in qualifying in position eighteen with Mcgill and Flack not far behind in position twenty three and twenty four effectively. All three drivers moved forward at stages throughout the heats with Mcgill running as high as fifth, Flack as high as eighth and Burke as high as fourteen. All three drivers were looking to put their best foot forward in a tough wet final. Unfortunately, luck didn’t go the Energy Corse driver’s way, with neither of the three drivers finishing the final. All three drivers will be looking to bounce back in July at Emerald.

Ky Burke and Jack Beeton were the double Energy Corse Australia attack on the KA4 Junior category. Qualifying was a great result for the team with Burke being up on the front row in second and Beeton on the second row in position four. Beeton didn’t leave the top five in the heats other then an incident in heat three. Burke had a second and fifth to start his heats but a DNF result in heat three hurt his chances. The final was under tough conditions with set up being crucial. Beeton was able to lead the team home to an incredible fourth place just off the podium. Burke had tough battles all throughout the final with things not going his way resulting in position fifteen overall. The young drivers will be looking to continue their good form for the final two rounds.

Jack Larsen was the youngest and the sole driver in the Cadet 9 class. Larsen qualified inside the top ten in position nine but moved around in the heats with his highest finish of position six in heat one the highlight. Larsen started down in position ten overall for the final and was able to put in a credible drive moving up just outside the top five in position six overall in a great final result for the young driver.

Toby Dvorak and Jake Czislowski were the final two drivers in the Energy Corse Australia team in the premier KA2 Junior class. Dvorak led the way in qualifying in position seven with Czislowski on the edge of the top forty and was looking to make progress through the field. Dvorak put in sensational heats with a fourth and two seconds having him off the front row of the grid for the final. Czislowski moved up as high as position seventeen in the heats and this had him starting out of position thirty seven for the final. Dvorak was right in the thick of things in the final and was able to come away with a strong fifth position overall. Czislowski put in a massive drive in the final moving up fifteen positions and crossing the line in position twenty two overall.

Team manager Cian Fothergill spoke post weekend on the results of his team of drivers. “It was a mega weekend all round for the team. All adapting to the treacherous conditions to achieve their goals. With multiple heat wins and top five finishes throughout each class was a good feet for the team considering there limited time driving in those conditions. I am very impressed and proud of the team for what they achieved”. Energy Corse Australia will be back on track at the fourth round of SP Tools Australian Kart Championship at the Emerald Kart Club.