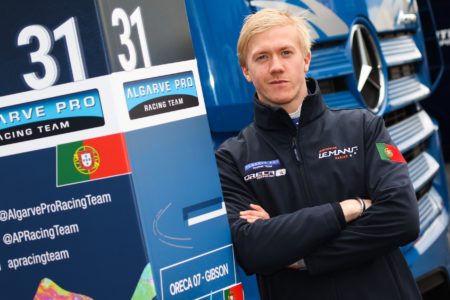 The Swedish driver will join Giles Motorsport for the campaign, which gets underway in January and runs for five consecutive weekends before concluding with the New Zealand Grand Prix.

This will be the 25 year old Stockholm based driver’s first single seater campaign since competing in the four rounds 2017-2018 MRF Formula 2000 series. Henning is more widely known as an endurance driver in the LMP3 and LMP2 categories, having competed in the 2017 and 2016 V de V Endurance Series. He then went on to compete in the European Le Mans Series for 2018 and 2019. This year was Henning’s first LMP2 season in European Le Mans series followed by his debut in the Le Mans 24 Hours, racing for ARC Bratislava in the LMP2 category.

His best performances came with French team Duquiene Engineering racing its LMP3 car in the 2017 VdeV Series. Enqvist’s first full season included wins in the 4 hours of Paul Ricard and third place in the 4 Hours of Magny Cours.

Looking ahead to his New Zealand campaign, he said: “I have heard so much about the Toyota Racing Series and do really look forward to be a part of the 2020 Season. The quality of racing and the timing is a key aspect for me going to New Zealand in order to prepare for the 2020 European Le Mans series. I’m also really excited to jump into a formula car again, especially the new Toyota FT-60.”

The 2020 Castrol Toyota Racing Series begins at Highlands Motorsport Park in Cromwell in New Zealand’s South Island over the weekend of January 17-19. It stays in the South Island for the second round a week later, moving to Teretonga Park near Invercargill for round two.

The series then heads to the North Island for the remaining three weekends of racing. That will include the Denny Hulme Memorial Trophy at Hampton Downs Motorsport Park, the New Zealand Motor Cup at a venue still to be confirmed and the final round, the New Zealand Grand Prix meeting over the weekend of February 14-16 at Manfeild – Circuit Chris Amon in Feilding.

It’s a new-look championship for 2020, with a new car – the Tatuus based Toyota FT-60 – along with a new 280 horsepower engine and Hankook tyres.