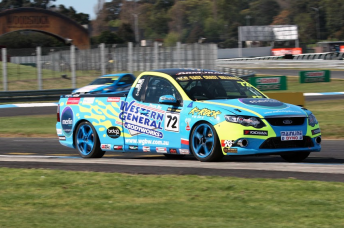 MEDIA RELEASE: Australian V8 Ute Racing driver Danny Buzadzic has declared his Western General Bodyworks/Merlin Migration Ford FG Falcon Ute “the best it’s ever been” after practice and qualifying for Round 5 of the series at Sandown today.

Buzadzic demonstrated encouraging pace in the opening practice session, recording the 17th-fastest time after a conservative run, before his momentum was interrupted with brake issues in the second session.

In qualifying, Buzadzic was pushing hard for improvements but spun into the gravel trap at Turn 1, causing a red flag and having his fastest time deleted.

“I was behind Leigh Nicolaou and just misjudged the braking point; there was a strong tailwind on the main straight which made it quite hard to figure out,” Buzadzic said.

“I came off the brakes because I didn’t want to flat-spot the tyre and I thought I would be able to drive out the other side and continue, but unfortunately I got bogged.

“However, I’m still very happy, the car is excellent. The engine is performing well and the car is rotating into the corners nicely, which is helping me get on the power early leading onto the two long straights.

“My race pace has been a lot stronger than my qualifying speed all year, so tomorrow I’ll be aiming to make up 10 or 15 positions in Race 1 and hopefully be in a position to take advantage of the random reverse-grid draw for Race 2,” Buzadzic concluded.