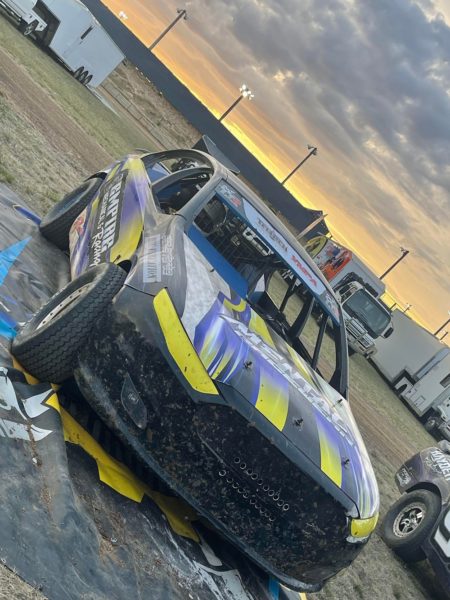 A huge week in the garage at Quick Time Automotive lead up to the weekends racing with team driver Brad Warren a Pakenham based businessman, leading a crew of supporters to work at putting some final touches into the car and making an engine transplant removing what was sitting in the car as a stock engine to something that would be competitive in the first meeting of the season. Brad telephoned a few racer mates and found an engine from another Falcon racer, Scott Angus.

Whilst major sponsor the Barra brothers at Empire Racing are putting together a powerplant for the team, it was not quite ready for the race car for the first round and Brad put the Angus Racing Team engine that is more than capable of competing in the VMPA into the Empire Racing team’s #44 car.

The pro engine from Empire is almost completed, the Barra brothers do not want to hand over just an engine. They are looking to hit the track with a bang. So, they are doing their own testing currently and sourcing some pistons they feel are going to really give the engine a heads up on others. Brad has become active in assisting Empire Racing and is currently collaborating with them by sharing some of his suppliers’ details with them to get what the team need.

The Angus Racing Team engine used on Saturday night, is built by Scott Angus himself. It is a BA gas motor with a set of cams in it. Warren bolted the engine into the race car and put a race clutch on it and used his own T5 Gearbox before Zac Leeson took the engine to Bog Stock Performance in Carrum Downs where Brendan got it tuned and ready to race and race it did very well for a basic engine package bringing a smile to everybody involved.

“I got to thank Scott Angus so very much for loaning his engine and for Brendan for stepping in to help with a tune with short notice. Thank you very much lads.” Said Brad.

On race night the Empire Racing team started back in the pack in heat race one around sixth and finished their-abouts after the power steering fluid became to hot and started locking the steering. Warren just cruised to the finish line.

Between heat races some front nose cap adjustments on the car to allow air flow through to the power steering cooler were made. This helped the team get through the rest of the racing to come.

In heat two a wild ride at the end of the race for Warren and the # 44 when he was around fourth place. The bolts that hold the steering wheel to the quick release wheel hub, broke off! The car was sent hard left and spinning into the infield.

Crew got down to fixing the issue and making some further adjustments after the race to make the race car set up for a slick track and a start in his Dash race which determines the back half of the field. In the Dash Warren went on to get under Darcy Wilson in turn two and then to the outside of Graham West at turn three and four on the first attempt to start the Dash. A caution light brought the field back together for a restart and Warren went side by side with West for the first lap before taking the lead and the win securing a ninth spot start for the feature event.

In the pits Warren, Hampton and the Crew tightened up the race car the best they could with what they had in order to get the best out of their wheels and their tyres for a long race. Warren’s strategy for the feature event was to be in the mix and ready to pounce as the faster cars made mistakes and capitalise on them. The strategy proved to be the correct one to make as those ahead dropped down or out of the race landing Warren the opening to move up into and secure a third-place result.

Brad Warren personally wanted to also thank ARP Earthworks owners Aaron and Sarah price for the loan of a trailer to get the car up to Moama, Ramsdale Wreckers for the support with parts during the week and RM & Co a personal supporter of Warren. Others to thank include Central Diff’s in Pakenham for sorting out a gear set swap and a diff build for the race car.

“I also want to thank the boys that crewed on Saturday night Justin, Danii Boston, Darren Skilton, Zach Hampton and for the lad’s that help me back home and during the week work on the car Zac Leeson, Ricky Born, Timmy Cole, Andrew Cunningham and Darren Skilton again. Without all their work, at the workshop last week, this would not have happened.” Shared Brad.