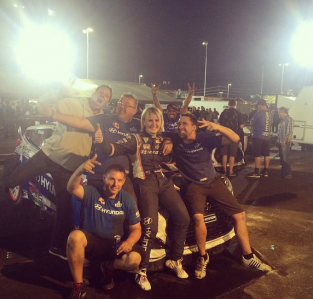 The Dunedin rally driver has been striving to make the top-ten-car main race at each of the previous nine rounds and was elated to join the best in the rallycross business this afternoon.

“I’m so happy; it was such a perfect way to finish the season. Everyone was so excited for me to make the final and I had heaps of fans cheering me on from the stands,” Emma says.

A typically carnage-filled race ensued and although Emma got a great start a red flag meant a re-start. She didn’t have the same speed off the line the second time around but still finished an extremely credible seventh.

It meant she was not starting off the back row for the heats but she decided that perhaps it wasn’t such an advantage after all.

“I was in an outside spot so although I got a good start, I got hung out to dry on the first two corners and slotted into fourth. I still kept with the group and had good fun racing in the bunch,” Emma says.

Her Rhys Millen Racing Hyundai Veloster Turbo’s gearbox deteriorated in the second heat and she again finished fourth, despite it jumping out of gear. Emma’s team changed it for the semifinals but unfortunately there was “mass carnage” on turn one.

“I got punted from behind which broke my rear upright and I had to retire from the race.”

Emma says her Rhys Millen Racing team were “flat out” over the past two days, keeping her Veloster running at the front of the pack.

“I really want to thank them, not only for all their hard work today but over the past nine rounds as well,” Emma says.

She has learnt an enormous amount about the art of rallycross racing over the past seven months and proved she is much more than the token, sole female racing with some of the best professional drivers in the world.

“I have improved steadily over the season to the point where my speed has been noticed, which is encouraging. I really want to come back next year and am currently looking for a drive, so hopefully we can make that happen,’ Emma says.