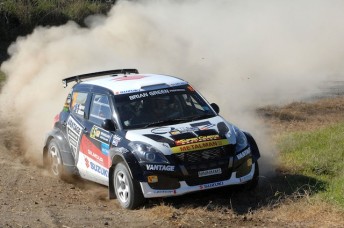 A strong build-up over summer, backed up by two years refining her Suzuki Swift Maxi, has Emma Gilmour eagerly anticipating the International Rally of Whangarei on April 17 to 19.

With no overseas commitments this year, Dunedin-based Emma will be driving her Suzuki, in its third Brian Green Property Group New Zealand Rally Championship driven by VINZ, and will be able to contest the full six rounds this season.

“My Suzuki Swift Maxi has shown only a little of its capabilities in the last two seasons due to a variety of reasons. But with the NZRC being my sole focus this season I’m really looking forward to changing the potential we have shown into consistency and outright results,” Emma says.

She has had a positive shakedown, competing in the Eastern Southland Car Club’s Long Point Rallysprint recently, where she finished second among a 30-plus car field.

It allowed Emma and her team to sort out a few pre-season niggles but best of all it got her back in the groove of going sideways in her Suzuki.

“The road we raced would have to be one of the best in the country and it was heaps of fun,” Emma says.

“Our team has put in a lot of hard work over the summer to further improve the handling and I’m really enjoying driving the Suzuki Swift Maxi.”

Re-joining Emma in the passenger seat this year will be Brisbane-based Anthony McLoughlin. A very experienced navigator he worked with her in 2012 and it was a successful partnership.

“Anthony was with me when I had my first-ever heat win in Whangarei, so I know we work well together. The last couple of seasons he has been co-driving internationally with Japanese rally driver and team owner Toshi Arai, so his pace note calling skills are top notch” Emma says.

Anthony says he is really looking forward to teaming up with Emma again.

“I did a number of NZRC events with her in 2012 and in all three events we finished on the podium so as a team inside the car we worked very well together.

“Emma is a great driver and she has proved that she can match it with the other high quality drivers that compete in the NZRC,” Anthony says.

Emma feels fortunate to have such a dependable team supporting her again, with Lindsay Tressler, and Mike Wilson looking after the Suzuki in the workshop and Glen Turner lending a hand on event.

Also behind her 2015 bid are her major sponsors Vantage Windows & Doors and Suzuki NZ, who are backing her again, and Emma says it is fantastic to have such loyal, long term sponsorships.

“We have a great team on board this year and I’m really looking forward to the season starting. The first two events of the NZRC [Whangarei and Rally of Otago, May 9 – 10] are my favorites so I can’t wait to get started,” Emma says.

She doesn’t have long to wait now until the 282km Rally of Whangarei roars into life with a spectacular evening in the city on Friday from 5pm.

A pre rally display, rally start and two runs of the Hella Pohe Island Super Special Stage beginning at 7pm will provide motorsport fans a fantastic opportunity to see the cars and stars up close and in action throughout the night.

While Emma lined up against him in the Red Bull Global Rallycross Championship last year, the chance to measure themselves against a driver of Block’s star-power will be a thrill for many of the national field competitors.

Following Friday’s night action the rally heads north on Saturday for eight special stages on the fast flowing cambered roads the rally is famous for, while Sunday’s final leg heads south of Whangarei for a further six stages.