Elliott sets his sights on Round 3 of the BSB Championship

Elliott sets his sights on Round 3 of the BSB Championship 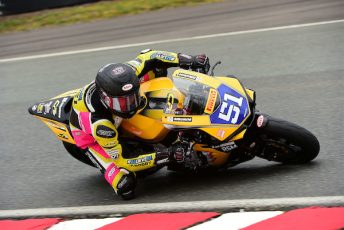 CF Motorsport rider Brayden Elliott will continue his progression and development as he heads to Oulton Park for the third round of the British Superstock 1000 Championship this April 29th – May 1st.

After a front row start at the beginning of the season, backed up with a top ten finish and promising results at round two, Elliott will head to Oulton Park more eager to tame the challenging circuit and to snatch up crucial championship points.

With a refined regime heading in to this weekend, the Australian rider shared that he has been working heavily on gaining crucial track knowledge, focusing strongly on mental preparation after round two proved just how competitive the Superstock class is.

“Reflecting back on round two I am pleased with how I finished the weekend. After evaluating the results, it proves just how competitive the championship is, and that getting the edge on your competitors is crucial,” Elliott started.

“The circuits we are competing at is unlike anything I have experienced, and with only two 25 minute practice sessions to learn each turn and bump trying to find each tenth of a second proves the difference between first and last.

“I have been continuing to work hard in many areas, preparing to enter the third round of the championship strong. I am continuing to set myself personal goals to reach throughout the weekend and have my eyes firmly set on finishing inside the points and as far up the grid as possible. Only completing two rounds so far I still feel as though it’s early days in my development within the British Superbike Championship although I’m very happy with my progress and personal improvements.

“Testing at Oulton Park last week proved extremely useful for the team and myself as we continue to develop and fine tune the CF Motorsport Yamaha R1. I am excited for this weekend and know that if I continue to focus on myself and hitting my goals I can be competitive and battling for positions,” Elliott finished.

Due to a Bank holiday this weekend the third round of the British Superbike Championship will be held on Saturday 29th, Sunday 30th and May 1st. You can follow Elliott’s progress on his official Facebook (Brayden Elliott Racing #51) and Instagram (@Braydenelliott51) pages.

Alternatively, you can watch the live timing stream by following this link: http://www.britishsuperbike.com/live-timing/