Ayden Elliott was able to clinch the final spot on the podium in the recent Australian Compact Speedcar Title at Nowra Speedway, and it’s a result that he and his team are very proud of. 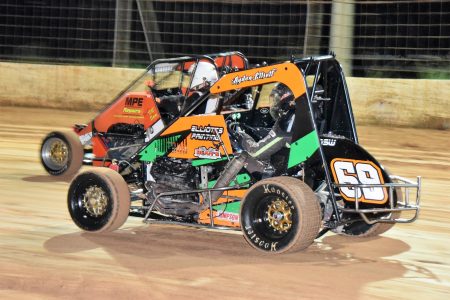 In only his second full season in the Compact Speedcar class, Elliott managed to qualify for the Australian Title-deciding feature race out of position five and then he was able to advance his way further up the field through the 25-lap event to snare a third-place finish on the podium.

“To finish on the podium of an Australian Title behind two of the country’s best Compact Speedcar racers in Mark Heaton and outgoing Australian Champion Justin Paull is something I’m very proud of,” the 22-year-old racer from Narellan in the south-west region of Sydney expressed.

“I feel that the team and I are continuing to make gains with our race car and this is reflected into our results this season, because when we have finished feature races this season, it’s most of the time been on the podium in the minor placings.”

Elliott continued by saying that his Australian Title podium result came thanks to a lot of hard work from the team leading up to the event.

“The team and I went over the car from top to bottom leading up to the Australian Title and we managed to make a number of improvements to it, and I feel that was one of the keys to our result,” he said.

“A big thanks must go to Adam Wray for all of his help leading up to the Australian Title and also on race night, because it was a lot of help and it was certainly appreciated.”

With the 2018-19 season now winding down, Elliott’s next outing is going to be this Saturday night’s latest NSW Club Championship round at Cullen Bullen Raceway and then the annual Memorial race meeting on the following Saturday night (May 11) at Bega’s Sapphire Speedway.