Elliott eager to capitalise on a Brands Hatch return this weekend

Elliott eager to capitalise on a Brands Hatch return this weekend 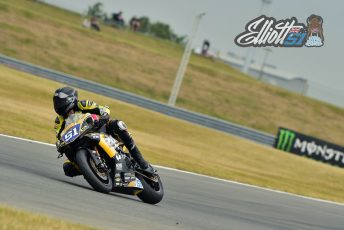 This weekend, July 21st-23rd, Brayden Elliott and the British Superstock 1000 Championship will make the eager return to the Brand Hatch Circuit this time competing on the GP version, in the seventh round of the Championship.

Elliott will tackle another Endurance race on the Saturday consisting of two 17-lap stints with only a 10-minute fuel, and tyre change break. Having already competed in an endurance race on the short circuit, Elliott is confident in his familiarity with the first part of the track.

Still in his rookie year in the Championship, Elliott has had to learn every turn, unlike the majority of his competitors who have raced them for years now. Heading back to a circuit that is familiar for Elliott and the CF Motorsport Team will mean that set up and track knowledge is good, leaving his practice sessions to gain confidence and drive down his times.

Elliott shared that “I am really excited to be heading back to Brands Hatch GP this weekend. It gives me confidence knowing that I have already raced on the first part of the circuit, especially when facing another Endurance race on Saturday,” he began.

“Although I am riding the extended GP version of the circuit, I have confidence that our setup is in a rough scope of where we want it to be, and that I can concentrate on learning sections of the track rather than all of it feeling unfamiliar to me.

“After the last two rounds I have definitely gained some confidence back, and feel that our momentum as a team is building, getting stronger each round. I am feeling more and more comfortable on the machine and the layout of the British tracks. I feel as though I can take advantage of the second half of the season.

“Again I am mindful of setting myself achievable goals and will head to Brands Hatch GP with a clear intention, but will not be applying any added pressure to myself. This weekend sees the return of the 100-mile endurance race, which is something I feel I can take advantage of. 17 laps with a quick pit stop then another 17 laps is mentally and physically demanding and I know the effort that I put in away from the track makes a huge difference in these races.

“I am continuing to tick the boxes each time I ride and with some extra races and track time this weekend I’m really looking forward to it!” Elliott finished.

The seventh round of the British Superbike Championship will play out across three days with Brayden completing an endurance race (2,17 lap races back to back) on Saturday the 22nd and a Sprint race (16 laps) on Sunday the 23rd. For a full event schedule with times, head to www.braydenelliott.com.au.

Make sure you stay up to date with Brayden’s progress this weekend by liking his racing Facebook page, ‘Brayden Elliott Racing’, or following him on Instagram @brayenelliott51.