Elliott crashes out of 8th on the penultimate lap

Elliott crashes out of 8th on the penultimate lap 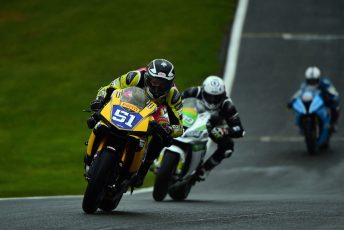 Despite showing continuous improvement from the beginning of the weekend unfortunately CF Motorsport rider Brayden Elliott crashed out of a top 10 finish on the penultimate lap after working his way to eighth position in less than ideal weather conditions at Oulton Park.

The English weather played havoc with the British Superstock riders this morning as an overnight shower saturated the track for the beginning of the day’s proceedings. However, despite sporadic rainfall throughout the morning a dry line was forming, and by the time Elliott gridded up the race was declared a dry race.

Launching off the line with a solid start, Elliott began to push through the pack in front redeeming himself seven positions to fifteenth before rainfall halted his charge, as race control deemed the track unsafe to continue the proceedings, signalling the red flag.

Declaring the second stint of the race wet, and shortening it to a nine-lap sprint, Elliott started the second half of the race in fifteenth position and with wet weather tyres on his Yamaha R1 machine.

The mixed weather conditions continued to affect racing, with Elliott using the shower of rain mid race to strengthen his standing to eighth with only two laps to go. Disaster struck Elliott on the penultimate lap where, unfortunately the Yamaha rider crashed out after touching a white line, ending his top ten chase.

Elliott shares, “I am obviously disappointed with how the weekend ended. The race was extremely difficult with the conditions changing lap by lap.”

“Despite how the weekend concluded I am happy with my effort to adapt to the changing conditions and move forward into the top ten from twenty-second position on the grid.

“Oulton park has definitely been one of the most difficult tracks I have had to learn on my journey so far, and I did find it a little difficult to master the track with only two practice sessions.

“I am glad we are returning to this track later in the year, as it gives myself and the CF motorsport team a chance to continue improving as we now have good knowledge of the track to guide us forward,” he concluded.

Elliott will enjoy a short two week break from racing before he is back on the gas for round four of the British Superstock Championship in conjunction with the World Superbike Championship, this May 26th-28th, at Donington Park.