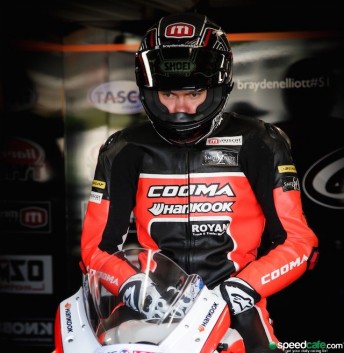 MEDIA RELEASE: Reigning Australian Supersport Champion Brayden Elliott can now confirm that he will compete in the entire Motorcycling Australia (MA) sanctioned 2016 Australian Superbike Championship (ASBK) for his first year in the premier category of two-wheeled road racing in the country, opting to choose the six round calendar which will feature events throughout the eastern seaboard in addition to one trip to Western Australia’s Barbagallo Raceway

Following an extensive personal research and consultation process with his team around him, Brayden confirmed he will compete in the ASBK for his first season at the top level, with a primary focus of the decision coming down to his ability to focus more extensively on testing and preparation in order to ensure he can be on top of his game at each round.

“It give’s me great pleasure to finally announce my commitment to racing in the 2016 Australian Superbike Championship,” Elliot said.

“After months of preparation and planning to make the jump into the premier Superbike category, it has been undecided as to which championship I will take part in this year.”

“Throughout 2015, my family supported team made the commitment to race in both the Australian (ASBK) and Australasian (ASC) Superbike Championships, which saw us travel all over Australia competing in twelve Championship rounds. Including this with the necessary testing at each circuit proved a nearly impossible task with enormous distance to travel, time to prepare bikes all from a family funded outfit”.

With the series’ direct association with Motorcycling Australia and subsequently the FIM, the World Governing body for Motorc ycle racing, the decision to race in the ASBK brought with it added benefits, most notably the opportunity to gain more experience with more international style race formats and the chance to expand the Tumut rider’s opportunities to compete globally in the near future.

Elliott does highlight however that appearances at the Australasian Series have not been ruled out as a chance to gain even more experience on the new Suzuki GSX-R 1000 bikes.

“With goals to race Internationally in the near future I knew I could only commit to focusing on one championship during 2016, which left the decision, which one to compete in. Having experienced the advantages and disadvantages of both ASC and ASBK during 2015 the decision was left purely to myself as to where I would rather compete.”

“I have chosen to race in the 2016 Australian Superbike Championship as I see it the best direction and opportunity to continue moving forward in my racing career. Along with a preferred race format and FIM recognition, I also enjoy the variety of circuits with dates that also suit my 2016 calendar.”

“This is a subject that everyone has their own opinion on, however at the end of the day the path that I choose to take in my career has been made by myself with a very supportive family and team surrounding me, which I am extremely thankful for.

“I may still be a regular face at selected ASC rounds throughout the year, the difference being I will be using them for more testing and Superbike experience rather then focusing on the outright Championship,” Elliott added.

After originally beginning his National road racing career in the ASC in the Supersport category in 2014 and being a favourite for the series in 2015, eventually finishing a close second, Brayden admits the experience gained throughout the last two seasons has been extensive on many levels and has been integral to his ability to be in the position he is now entering the new season.

“I have thoroughly enjoyed my time competing in the Australasian Superbike Championship, also forming a great friendship with event organisers, Terry and Gloria. If it wasn’t for their club Championship ‘race your mates’ and introduction into road racing, I wouldn’t find myself with the experience and time on the bike that I have had.”

“Thank you to everyone for their support, lets get the Championship underway,” Elliott concluded.

A link to the full 2016 Australian Superbike Championship (ASBK) calendar can be found here – www.asbk.com.au