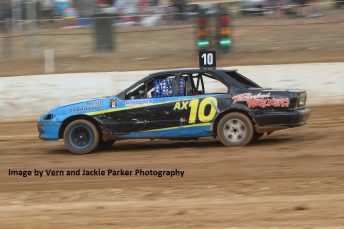 This Sunday afternoon Drouin Speedway comes alive again when the club hosts two big feature events and all the local heroes in club racing with the day attracting sixty cars to put on a show, the Standard Saloon Eliminator Cup and the Ladies Crash and Bash will headline the day.

The field includes current points leader Nick Chrystie, Victoria number 2 driver Shane Stewart from Morwell, Tim Hutchinson from the other side of the West Gate Bridge and local hard chargers Pakenham’s Mark Miles, Leigh Gooding from Yinnar, Mitch Blencowe from Bunyip, Cameron Dike, Tegan Bullard and Warragul’s Tracey Ingram the Victorian Ladies Champion to compete for the prestige of winning such an event, an event the Stewart family has a strangle hold on with Chris and Daniel having won so many times before.

The field also includes Victoria number 3 ranked driver Jacob Vuillermin who in typical Jacob style was a little bit tipsy when he was trying to nominate and nominated to a wrong number! He will need to wheel real hard from the back of the field in the heat races.

It is anybodies race this weekend and drivers will enjoy the now stretched out track with plenty of passing room as proven in the last show by the V8 Super Sedan racing around the outside of competitors.

In the Ladies Crash and Bash first round of their Gippsland series, a number of regular race drivers from the area have joined the born and bred Crash and Bash girls for what should be a spectacular day. Leeanne Young the Victorian Champion is joined by Allyssa Montebello and Maleah Brown the current Victoria two and three ranked drivers to compete against first event of the season winner Bianca Brown and a long list of competitors.

We do not know who to tip as the likely winner as the class of the field is so deep, however watch for Sharon Morrison led Standard Saloon squad of Kellie Latham, Tegan Bullard and Sarah Price to try and ruffle up a few of the long time Crash and Bash Girls, Morrison herself has some strong Crash and Bash experience and could easily come out on top.

Supporting the main events is the local Standard Saloon ‘Boost 2 Drive’ Junior Standard Saloons Series, Sports Sedans and Unlimited Sedans & the Vintage Super Modifieds. It will be a great day for the family at Drouin this Sunday. Event enquiries can be made to 0422 289 133