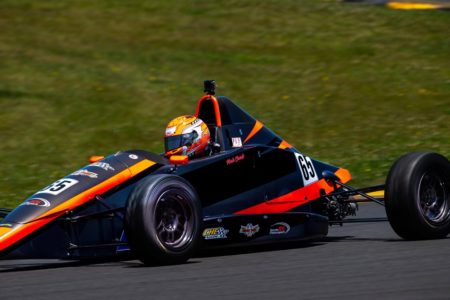 An ecstatic Noah Sands has joined the winner’s circle in just his second car racing event, taking out two of the three races to secure overall honours in the third and final round of the NSW Formula Ford Championship at Wakefield Park on the weekend.

In Race 2, held on Sunday morning, Sands again made a strong start and was running in third when Burcher and Sargent collided. Sands’ rapid reflexes ensured he not only dodged the incident, but was able to sneak into the lead.

From there, Sands withstood extreme pressure from his rivals – most of whom had at least a season’s experience under their belt – to take his maiden victory.

“Fortunately, I was able to avoid getting caught up in the crash with Tom and Cody but once I was in the lead, I couldn’t afford to make a single mistake,” Sands said.

“I was under pressure from Zach Bates and Jake Donaldson, who are both very fast and experienced. I concentrated on driving perfect racing lines and ensuring I didn’t make any errors.”

Sands led early in Race 3 before a missed gearshift allowed Bates through to the lead on the second lap. However, a determined Sands fought his way back to the lead shortly afterwards and from there he was never headed, taking the chequered flag in first position.

The 16-year-old Leeton driver said the weekend’s results were well beyond his expectations.

“Formula Ford is a very competitive category and on the weekend, there were some drivers who had travelled from interstate to race against the locals,” Sands said.

“Considering it was only my second car racing event and we were up against such high-quality opposition, I would have been delighted to finish on the podium; to win two races and finish first overall for the weekend is well above what I was aiming for and it’s a credit to my CHE Racing Team for preparing such a brilliant car for me.”

Sands said he will enjoy celebrating his success during the off-season, but concedes there is a lot of hard work ahead of his planned assault on the 2021 Australian Formula Ford Championship.

“It’s definitely nice heading into the break on such a high note, but I’m not getting carried away – the national championship will be even more competitive than the state series and we will have to work very hard if we want to repeat these sorts of results,” he said.

“It was awesome to see Tom winning the championship; he’s helped me a lot with my transition from karts to car racing, he’s a very good driver and he thoroughly deserves the title,” Sands concluded.