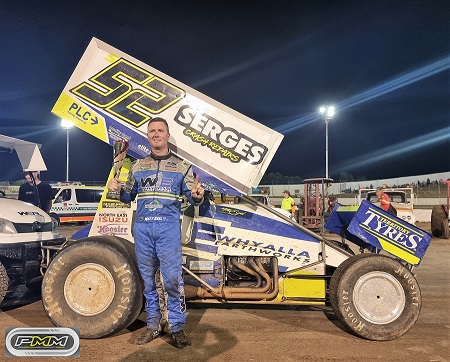 For the third time in his career, and the first time since 2014, Matt Egel is the South Australian Sprintcar Champion after securing the title on Wednesday night at Murray Bridge as part of the Australia Day Sprintcar Spectacular. After starting from position two in the 30-lap final Egel trailed pole sitter Brad Keller for the opening 20 laps before he found the rubber on the inside of turn four and made the race winning pass. The win was the second State Title victory for Car Owners Geoff and Michael Brown, having won in 2020 with Lachlan McHugh.

In a twist of fate Egel would defeat McHugh after the newly crowned Classic Champion got by Keller with five laps remaining with Keller holding on to round out the podium. For Keller it was his sixth podium result in the South Australian Championship, which also includes a victory in 2014/15.

On the podium Matt was excited with the win and he was surprised to find out it was his third victory in the State’s longest running Sprintcar event. “It is my third win? That cool, but it’s been a while. I have won a few races since then so it’s hard to keep track. When I got by Brad, I could feel the rubber starting to come in. Luckily, I found it before he did so once I got to the lead I just sat there and tried to protect my tyres. I knew that Brad and Lockie would still be close so I just tried to go as fast as I could”.

For McHugh it was his best result at the Murray Machining and Sheds Murray Bridge Speedway, a track that he has struggled at in the past.

“Matt has done a lot of laps around here and he is always fast. It was a last-minute decision to race here tonight. Nick (Speed) got the call from Barry (Waldron) and said he wanted us to support the track, so we took a detour on the way home” added McHugh following the race.

Earlier Egel set the pace in qualifying with a lap of 11.171 while Keller, Mark Caruso, Walker and Heinrich were the heat winners.

The only real incident of the night occurred in heat one when Luke Dillon and Chad Ely made contact in turn two with Ely hitting the wall hard totally destroying the chassis on the Scott Perrett owned #98 ending his night before completing a racing lap.