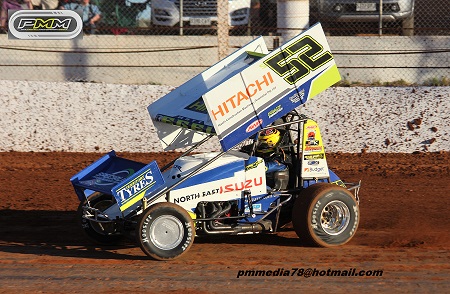 The Sprintcars SA Speedweek kicked off on Boxing Day at the Whyalla Speedway in sweltering conditions with the temperature nudging 40 degrees but Matt Egel kept his cool to lead all 35 laps to claim the opening round and, in the process, it was the third successive victory for the #52 Whyalla Earthworks Racing Team at their home venue, dating back to March.

When asked about the Team’s dominance at the Whyalla Speedway Egel was quick to praise his hard-working team.

“I don’t really know why we are so good here at the moment, we have a good package that is fast everywhere we go so all I can put it down to the team. They work so hard and they make my job of driving it pretty easy” added Egel following his celebratory do-nuts on the infield following the $10,000 victory.

For the first time since 2012 dual Australian Champion David Murcott was back behind the wheel of the Downing Brothers #97 and he made an immediate impact setting the quickest time in his Time Trial group, winning a heat and finishing in the runner-up position behind Egel.

“Tonight, was all about knocking off the rust. I haven’t driven since March and I haven’t been a part of this team for 8 years so we can only get better as the week goes on” commented Murcott.

Third place went to Portland based racer Brock Hallett, but the result could have been a runner-up finish as he was running second before a slight mistake in turn two allowed Murcott by and with the track taking rubber it was hard to get the spot back.

Lisa Walker recorded a season best result in fourth and she was closing on Hallett late but ran out of laps while Ben Morris placed inside the top 5 for the first time in his Sprintcar career. After a tough night, that included blowing a power steering hose in hot laps, Daniel Pestka bounced back to finish sixth and was the last driver on the lead lap. Austin McDonald, Mike Fox and rookie Max Vidau completed the finishers.

The 17-car feature race saw Murcott and Egel on the front row with Hallett, Brad Keller, Walker, Steven Caruso, Ryan Jones and Joel Heinrich completing the first four rows. On the green Egel jumped into the lead only to have the start called back for a spin in turn two by Alice Springs competitor Lenny Cole.

The second start proved to a costly one for several drivers as a massive accident occurred before the field even got to the flag stand with Brad Keller rolling in spectacular fashion taking out a third of the field. In addition to Keller the incident involved Heinrich, Caruso, Max Vidau, Jay Brown and Daniel Pestka.
With so many cars damaged and 35 laps still to go an open red was called with Pestka, Vidau and Caruso being able to re-join.

With most of the outside line being involved the big winner was rookie Jason Bolitho who was listed to start in position 12 but lined up fourth on the third attempt.

Once the race got underway the green was only on for a sort period as Ryan Jones made contact with Vidau in turn four and riding out a big barrel roll down the front straight.

After the disastrous start the remaining 34 laps ran without a caution with Egel dominating the race winning by almost 7 seconds.

Earlier in the night Brad Keller set the quickest time overall in Qualifying with a lap of 12.259 in group 2 while David Murcott and Matt Egel also paced their heat groups. Heat winners were Murcott, Hallett, Egel, Walker, Fox and Steven Caruso. For Fox it was his first ever heat win in a Sprintcar.

Night 2 of the Sprintcars SA Speedweek will be on Monday December 28 at the Borderline Speedway in Mount Gambier with a field of close to 30 cars expected before the tour heads to the Tolmer Speedway in Bordertown for the first 410ci Sprintcar race at the venue for six years.